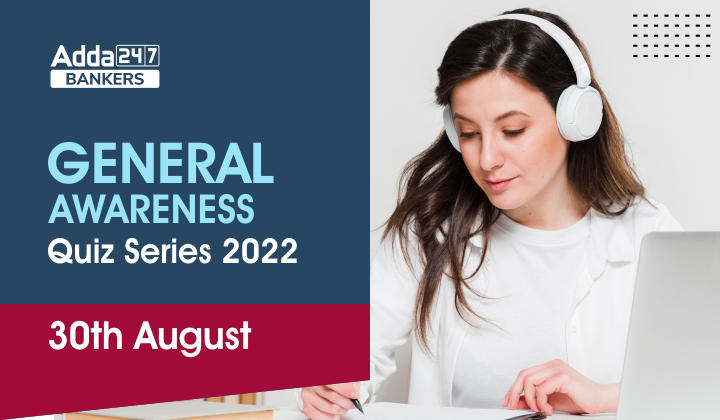 General Awareness Quiz Series 2022: 30th August: Hello Students, General Awareness is an essential part of all government exams. It’s better to prepare this section daily and revise the same using the factsheet provided. Bankersadda team has brought you up a new series in which we will come up with 10 questions and answers, other options of the question have related news to them. So don’t miss reading the solutions.

Q2. “Free Fall: My Experiments with Living” : Book is written by ?

Q3. A new book named ‘India’s Economy From Nehru To Modi:: A Brief History is written by ?

Q4. “Meet the Champion project” is launched by which ministry ?

(a) Ministry of Education

(b) Ministry of Tourism

Q6. Who has been appointed as the president of the Indian Olympic Association?

(b) Chirag Shetty and Saina Nehwal

Q8. Swachh Sagar, Surakshit Sagar campaign is to promote environmental sustainability.  The coastal cleanup campaign by MoES aims at removing approximately how much tonnes of waste from the beaches?

(a) Ministry of Education

(b) Ministry of Information, Electronics and technology

Q10. Which Indian Cricketer is the first Indian who have played 100 matches in all three formats?

Acclaimed classical dancer and activist Mallika Sarabhai bares it all in her upcoming self-help memoir, “Free Fall: My Experiments with Living”

A book titled “Lion of the Skies: Hardit Singh Malik, the Royal Air Force and the First World War” is all about an “India’s first fighter pilot” who participated in the World War.

A book titled “Dilip Kumar: In the Shadow of a Legend” by Faisal Farooqui

A new book named ‘India’s Economy From Nehru To Modi:: A Brief History‘  written by Pulapre Balakrishnan will be launched shortly.

Marine biologist Ellen Prager has come up with a book titled “Dangerous Earth: What we wish we knew about volcanoes, hurricanes, climate change, earthquakes and more”.

On National Sports Day, the Youth Affairs and Sports Ministry will host the “Meet the Champion project” in 26 schools across the nation. Nikhat Zareen, who won gold medals at the Commonwealth Games and the World Championships, Bhavina Patel, who won a medal at the Paralympics, and Manpreet Singh, who won a medal at the Tokyo Olympics, are just a few of the well-known athletes that will take part in Meet the Champion project.

The Appointments Committee of Cabinet (ACC) has appointed Ananth Narayan Gopalakrishnan, as a whole-time member of the Securities and Exchange Board of India (SEBI).

The Indian Olympic Association has co-opted Adille Sumariwalla as the President of the association till fresh elections are held.

Satwiksairaj Rankireddy and Chirag Shetty became the first Indian pair to win a medal in the men’s doubles competition at the World Championships. Satwiksairaj and Chirag are the world’s number 7.

The total length of the Indian coastline is approximately 7,500kms and reflects the vast ocean resources of our country. To conserve and emphasize on its significance, the #SwachhSagarSurakshitSagar campaign will clean up a massive amount of the plastic and human waste residue that pollutes it, with volunteers from all over India

The coastal cleanup campaign by MoES aims at removing approximately 1,500 tonnes of waste from the beaches.

Cricket Legend Virat Kohli has become the first Indian and just the second player overall in international cricket history to have played 100 matches each in all three formats of the game.