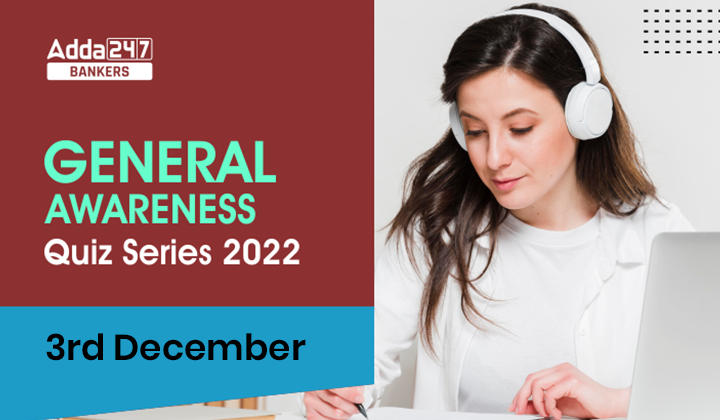 General Awareness Quiz Series 2022: 3rd December: Hello Students, General Awareness is an essential part of all government exams. It’s better to prepare this section daily and revise the same using the factsheet provided. Bankersadda team has brought you up a new series in which we will come up with 10 questions and answers, other options of the question have related news to them. So don’t miss reading the solutions.

Q1. Which state has become the first state in the Northeast to pass the first-ever Mental Health and Social Care Policy?

Q3. What is the outlay for the Production Linked Incentive (PLI) scheme for drones and drone components for implementation during 2022-23 to 2024-25?

Q4. What is the name of the terrorist arrested by NIA for the massive blast that took place in the Ludhiana Court Building?

Q5. Who is the Indian Ambassador to USA?

Q6.With which country , India is organizing the Sylhet Festival?

Q7. Who has won the Champion of Champions Award and fourteen Corporate Communication Excellence Awards at the 16th PRCI Global Communication Conclave in 2022?

Q8. What is the name of the book which got the Baillie Gifford Prize?

(a) Super-Infinite: The Transformations of John Donne

(b) The Chipko Movement: A People’s Movement

(c) The World: A Family History

Q9. What is the name of the Military exercise between India and Singapore?

Q10. In which district of Gujarat, Election commission of India made a poll booth for its lone vote : Mahant Haridashji Udasin?

Meghalaya has become the first state in the Northeast to pass the first-ever Mental Health and Social Care Policy.

World AIDS Day which is globally observed on 1st December since 1988, is an opportunity to show solidarity with people living with HIV (PLHIV) and create awareness for the same.” “The theme of this year’s World AIDS Day is “Equalize”, which is a slogan for a call to action for all connected with this crusade. It calls for taking practical actions needed for addressing inequalities in the HIV (Human Immunodeficiency Viruses) infected and affected populations across the country and also help in ending AIDS (Acquired Immunodeficiency Syndrome)”

The government has approved the Production Linked Incentive (PLI) scheme for drones and drone components for implementation during 2022-23 to 2024-25 with an outlay of 120 crore rupees. The scheme is being implemented by the Ministry of Civil Aviation.

National Investigating Agency (NIA) arrested the most wanted terrorist Harpreet Singh from Indira Gandhi International Airport in Delhi, when he arrived in Kuala Lumpur, Malaysia. Harpreet Singh was the key accused in the massive blast that took place in the Ludhiana Court Building, in which one person died and six persons were injured.

The tenure of India’s Ambassador to the US, Taranjit Singh Sandhu, has been extended for a year till January 31, 2024.

A book on the popular forest conservation campaign Chipko Movement, written by historian-activist Shekhar Pathak, was named the winner of the Kamaladevi Chattopadhyay NIF Book Prize 2022. Name of the book:The Chipko Movement : A people’s Movement

The 12th Edition of Exercise Agni Warrior, a bilateral exercise between the Singapore & Indian Army, which had commenced on 13 November 2022 concluded at Field Firing Ranges, Devlali (Maharashtra).

A polling booth located in a remote forest area of Gir Somnath district in Gujarat recorded 100 per cent voting after its lone voter cast his vote in the first phase of the state Assembly elections. The area is part of Una Assembly constituency, which went to polls along with 88 other seats in the state. The Election Commission (EC) had set up a polling booth at Banej village located inside Gir forest so that the only voter there can exercise his franchise.

Mahant Haridasji Udasin, who is the only voter there