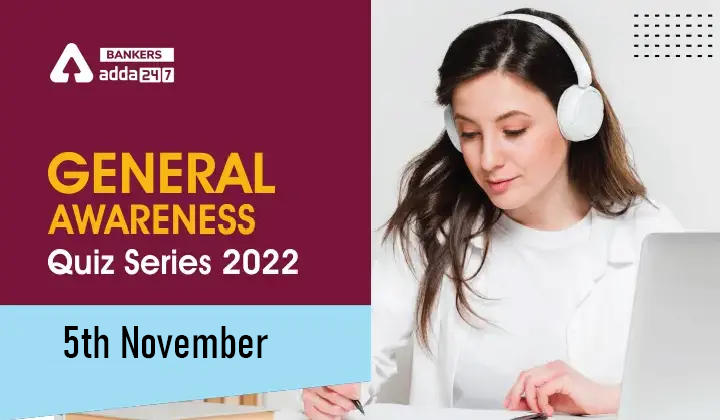 General Awareness Quiz Series 2022: 5th November: Hello Students, General Awareness is an essential part of all government exams. It’s better to prepare this section daily and revise the same using the factsheet provided. Bankersadda team has brought you up a new series in which we will come up with 10 questions and answers, other options of the question have related news to them. So don’t miss reading the solutions.

Q1. Report titled ‘Reinvigorating India’s Economic Engagements with Southern Africa’ released by EXIM Bank of India. Which of the following countries is not a major buyers of Indian arms during 2017- 2021?

Q2. Which of the pairs of scheme and bank is incorrectly matched?

Q3. IRDAI has announced the Bima Sugam portal. It will be live from

Q4. Who has started Bhavishya portal?

(a) Department of Pension & Pensioners’ Welfare

Q5. 106-year-old Shyam Saran Negi, the first voter of Independent India, exercised his right to franchise for the 34th time. He is from which state?

Q6. What is name of the political of the prime minister Benjamin Netanyahu of Israel who returned to power?

Q7. Who has been appointed as the CEO of Energy Efficiency Services Limited?

Q8. Adani New Industries Ltd. has constructed a wind turbine as part of its growth plans for renewable energy that is taller than the Statue of Unity  in which city?

Q9. Top-seeded Indian Grandmaster, R Praggnanandhaa won the titles in the Open in the Asian Continental Chess championship. Who won in the women section?

Q10. What is the gender wealth gap in India according to WTW Global Gender Wealth Equity report ?

This is as per report titled ‘Reinvigorating India’s Economic Engagements with Southern Africa’ released by EXIM Bank of India. Mauritius, Mozambique and Seychelles have become major buyers of Indian arms during 2017- 2021

Aditya Birla Sun Life AMC launches ‘Sahyog’: Purpose: to improve the financial health of support staff and their families.  ‘Sahyog’ helps an employer to start a systematic investment plan in mutual funds on behalf of the domestic help to achieve their basic investment goals

IRDAI, recently announced the launch of Bima Sugam—an online marketplace that will house all companies selling life and non-life insurance on a single platform. The portal is scheduled to go live from 1 January 2023

Bhavishya’ is an initiative of Department of Pension & Pensioners’ Welfare, which is launched with the goal to ensure payment of all retirement dues and delivery of Pension Payment Order (PPO) to retiring employees on the day of retirement itself. The system provides online tracking of pension sanction and payment process by the individual as well as the administrative authorities for all actions preparatory to grant pension and other retirement benefits as well as payment of monthly pension after retirement.

106-year-old Shyam Saran Negi, the first voter of Independent India, exercised his right to franchise for the 34th time for the Himachal Pradesh Assembly elections through a postal ballot at his residence in Kinnaur district

Former Israeli prime minister Benjamin Netanyahu sealed his return to power, as the final vote count from elections this week gave him and his far-right allies a clear majority in parliament. Results released by the electoral commission said that with 99 per cent of votes counted, Netanyahu’s right-wing Likud party had earned 32 seats in Israel’s 120-seat parliament, the Knesset.

Adani New Industries Ltd. has constructed a wind turbine in Mundra in Gujarat as part of its growth plans for renewable energy that is taller than the Statue of Unity and has blades that are broader than the wingspan of a jumbo jet. Adani New Industries Limited (ANIL) has announced the installation of the largest wind turbine generator (WTG) in the nation in Mundra, Gujarat.”

A new study revealed that India has the widest gender wealth gap (64%) as compared to other APAC countries. This is largely due to the higher burden of caregiving responsibilities. The 2022 WTW Global Gender Wealth Equity report found that opportunities for women in leadership positions are also limited, with only 3% of women in the workforce occupying senior positions in India.