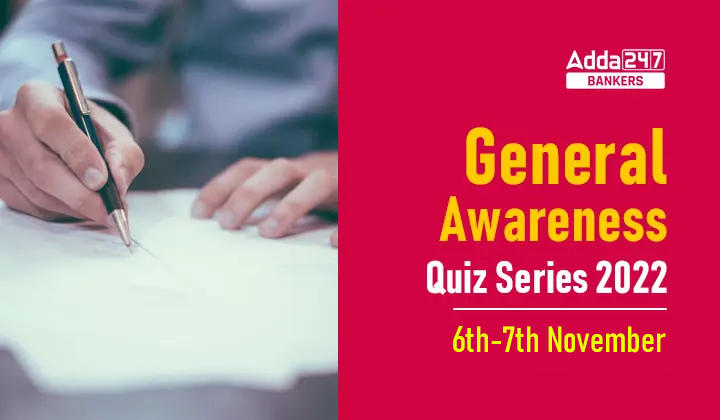 General Awareness Quiz Series 2022: 6th-7th November: Hello Students, General Awareness is an essential part of all government exams. It’s better to prepare this section daily and revise the same using the factsheet provided. Bankersadda team has brought you up a new series in which we will come up with 10 questions and answers, other options of the question have related news to them. So don’t miss reading the solutions.

Q1. Which country is home to worlds longest passenger train?

Q2. Which company has taken up the  project to build Mongolia’s first Greenfield oil refinery in Ulaanbaatar?

(a) Megha Engineering and Infrastructure Limited

Q3. North Korea has raised its objections against which of the defence exercises?

Q4. There were certain states which were in News. Which of the following options is incorrectly matched for the news associated to it?

Q5. What is the name of the asteroid which is considered harmful for earth?

Q6. There are personalities which were in news. Which of the following pairs is correctly match with the news associated with them.

(a) MT Vasudevan Nair : Honorary Member in the General Division of the Order of Australia (AM)

Q7. Which of the following are the female officers appointed as Inspectors General (IG) in CRPF?

(a) Smriti Mandhana and Annie Dhundia

(b)  Seema Abraham and Smriti Dhundia

Q8. Vijayakumar Menon dies at 76. He was associated with

Q9. Who awarded with Award of Excellence in Urban Transport?

Q10. Where 27th Session of Conference of Parties of the UNFCCC (COP 27) is going to be held?

Switzerland is now home to the world’s longest passenger train. The train has 100 coaches, measures 1910 metres and consists of 4,550 seats.

India has been ranked as the nation with the cheapest manufacturing cost ahead of China and Vietnam, according to a report. According to the US News and World Report, out of 85 nations, India has bagged the 31st position in the overall Best Countries ranking.

Union Minister Dharmendra Pradhan inaugurated the ‘Baji Rout National Football Tournament’ in Dhenkanal in Odisha. The government under the leadership of Prime Minister Narendra Modi has been promoting sports and games in the country through initiatives like khelo India and Fit India.

Kerala is set to host the Track Asia Cup 2022 Cycling Tournament. Track Asia Cup is one of the biggest cycling events and will be held at LNCPE Outdoor Velodrome.

The Union Cabinet has given its approval for the naming of the new Greenfield Airport at Hollongi, Itanagar, the State Capital of Arunachal Pradesh as “Donyi Polo Airport, Itanagar”.

A group of scientists has found three enormous near-Earth asteroids that were concealing from the Sun’s light. One of them, 2022 AP7, is “possibly harmful” to Earth.

M T Vasudevan Nair, a renowned Malayalam author and Jnanpith laureate, has been chosen to receive the inaugural Kerala Jyothi award, which was established by the state government in the spirit of the Padma awards to recognise people who have made priceless contributions to society.

The Federation of Indian Chambers of Commerce and Industry (FICCI) has announced Mr Subhrakant Panda as its President-Elect.

The Ministry of Education has set up a high-level panel to strengthen the assessment and accreditation of higher educational institutions, on November 4, 2022. The panel will be headed by Dr K Radhakrishnan, Chairperson, Board of Governors, IIT Kanpur. He is also the chairperson of the Standing Committee of IIT Council.

After their entrance into the CRPF in 1987, two female officers have recently been appointed as Inspectors General (IG). The Rapid Action Force (RAF), a specialised anti-riot force, has appointed Annie Abraham as its IG. As the new Bihar sector IG, Seema Dhundia has been appointed