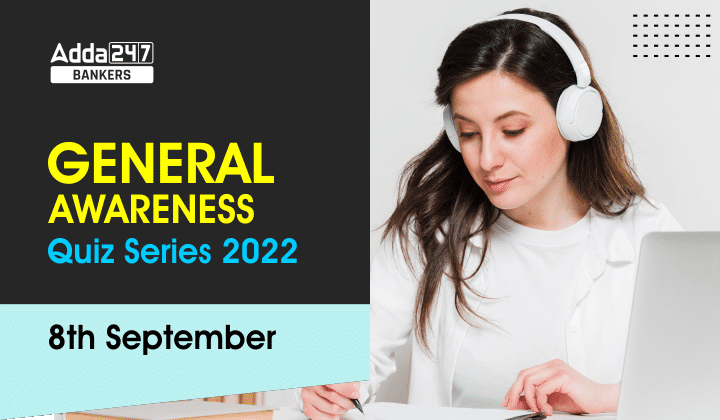 General Awareness Quiz Series 2022: 8th September: Hello Students, General Awareness is an essential part of all government exams. It’s better to prepare this section daily and revise the same using the factsheet provided. Bankersadda team has brought you up a new series in which we will come up with 10 questions and answers, other options of the question have related news to them. So don’t miss reading the solutions.

Q1. Who has been awarded with International Travel Award 2023 for Best Destination for Culture?

Q2. Who has been awarded Sahitya Puraskar of the Loknayak Foundation?

Q4. Which state has launched the ‘Pudhumai Penn’ scheme?

Q5. Which of the following has not been the part of UNESCO Global Network of Learning Cities (GNLC).?

Q6. Using religion, race, caste, community or language for electoral gains, is prohibited under which Section of Representation of People’s Act 1951?

Q7. Who has released the Blue Transformation Roadmap?

Q8. recombinant nasal vaccine has been approved by Central Drugs Standard Control Organisation (CDSCO) for primary immunization against COVID-19 in 18+ age group for restricted use in emergencies, which company has made it?

Q9. To which of the following fields does Einstein Ring is related to ?

With 9.12 million cases, Uttar Pradesh leads the way in terms of case disposition and admission into the e-Prosecution site operated by the Union government under its Digital India Mission

The Indian cities, Nilambur (eco-tourism destination in Kerala) and Thrissur (cultural capital of Kerala) in Kerala & Warangal in Telangana have gained recognition from the United Nations Educational, Scientific and Cultural Organization (UNESCO) after becoming India’s first entrants in the UNESCO Global Network of Learning Cities (GNLC).

Using religion, race, caste, community or language for electoral gains, is prohibited under Section 123 of RPA 1951 ( Corrupt practices in elections)

FAO has recently released Blue Transformation Roadmap to give importance to the aquatic food system as the driver of employment, inclusive growth, SDGs and environmental recovery.

An Einstein ring is created when light from a galaxy or star passes by a massive object en route to the Earth. Due to gravitational lensing, the light is diverted, making it seem to come from different places.

The Malaysian Age Group Rapid Chess Championship was held in Kuala Lumpur, where six-year-old Anishka Biyani came out on top with the gold medal.