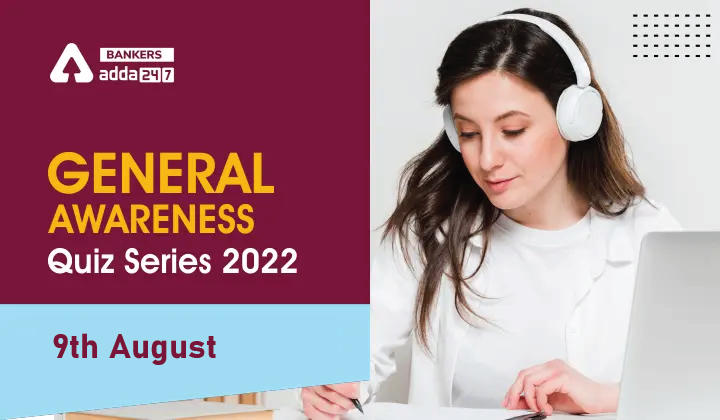 General Awareness Quiz Series 2022: 9th August: Hello Students, General Awareness is an essential part of all government exams. It’s better to prepare this section daily and revise the same using the factsheet provided. Bankersadda team has brought you up a new series in which we will come up with 10 questions and answers, other options of the question have related news to them. So don’t miss reading the solutions.

Q2. ‘FPI Advisory Committee’ has been constituted by SEBI.What P stands in FPI?

Q3. Tibetan spiritual leader, Dalai Lama was honoured with the ‘dPal rNgam Duston’ award, This award is given by state government?

Q4. Name the first woman director general of the Council of Scientific and Industrial Research

Q5. Panchamrut Yojana’ will help to achieve the goal of doubling farmers’ income is by which state ?

Q6. The 12th edition of DefExpo – India’s flagship exhibition on Land, Naval and Homeland Security systems will held in which city?

Q7. Him Drone-a-thon’ programme is launched by ?

Q8. Creation of Management Structures for Hazardous Substances scheme is under which ministry?

(a) Ministry of Environment Forest and Climate Change

(b) Ministry of chemical and fertilisers

Q9. What is the name of Lunar mission of South Korea?

Q10. Nagasaki day is commemorated on which day?

Sini Shetty has won the title of Femina Miss India 2022. She will now represent India at the 71st Miss World pageant.

The Securities and Exchange Board of India (SEBI) has constituted a 15-member committee to increase foreign investment. The advisory committee constituted by SEBI is called the ‘FPI Advisory Committee’

Former ICICI Banker, Madhabi Puri Buch has been appointed as the new Securities and Exchange Board of India (SEBI) chairman.

The 12th edition of DefExpo – India’s flagship exhibition on Land, Naval and Homeland Security systems – will be held in Gandhinagar, Gujarat between October 18-22, 2022.

The Indian Army in collaboration with the Drone Federation of India has launched the ‘Him Drone-a-thon’ programme on 08 August 22. This initiative in line with Atmanirbharta in defence manufacturing is aimed to catalyse and provide focused opportunities to the Indian drone ecosystem to develop path-breaking drone capabilities for meeting requirements of frontline troops.

Ministry of Environment Forest and Climate Change  under its central sector scheme “Creation of Management Structures for Hazardous Substances” provides financial assistance for innovative technologies for environmentally sound management of chemicals and wastes.

Japan commemorates the 9th of August every year as Nagasaki day. On August 9, 1945, the United States dropped an atomic bomb on Nagasaki, Japan.