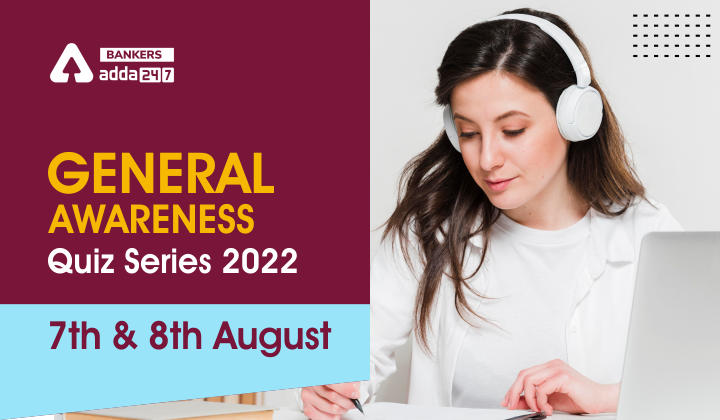 General Awareness Quiz Series 2022: 7-8th August: Hello Students, General Awareness is an essential part of all government exams. It’s better to prepare this section daily and revise the same using the factsheet provided. Bankersadda team has brought you up a new series in which we will come up with 10 questions and answers, other options of the question have related news to them. So don’t miss reading the solutions.

(b) Handloom, an Indian legacy

Q3. Women officers in the Indian Navy made history when they flew a Dornier 228 on the first-ever all-female autonomous maritime reconnaissance and surveillance mission. In which sea/ ocean ?

Q4. What is the name of the tiniest satellite launc by India?

Q5. Which state proposed to  develop one Sanskrit-speaking village in each of its districts?

Q6. Which space agency made the first multispectral maps of Mars?

Q7.Donyi Polo Aiport is under construction in which state?

Which statements are incorrect?

Q10. What is the cause of Kalazar disease?

The 80th anniversary of the August Kranti Din or Quit India Movement, which is considered as one of the important milestones in the history of the freedom struggle of our country, is being observed on 8 August 2022. The slogans “Quit India” and “Do or Die” became battle cries for the freedom fighters during the Quit India movement.

Women officers in the Indian Navy made history when they flew a Dornier 228 on the first-ever all-female autonomous maritime reconnaissance and surveillance mission in the North Arabian Sea. Five officers from the Indian Navy Air Squadron (INAS) 314 stationed at the Naval Air Enclave in Porbandar, Gujarat, completed the mission.

About the Maritime Surveillance Mission over Arabian Sea:

Uttarakhand government has decided to develop one Sanskrit-speaking village in each of the 13 districts in the state.

The “Chief Minister Equal Education Relief, Assistance and Grant (Cheerag)” programme was recently introduced by the administration of Haryana

NASA made the first multispectral maps of Mars available

The researchers from the National Aeronautics and Space Administration (NASA) made the first multispectral maps of Mars’ surface public.

Arunachal Pradesh has given the name of ‘Donyi Polo Airport’ to its third airport, which is under construction in Itanagar.
It is the only airport in the capital city and third in the state after Pasighat and Tezu airports. In the state’s tribal language, Donyi means Sun and Polo means Moon.

Jagdeep Dhankhar has won India’s Vice Presidential election 2022, defeating Opposition candidate Margaret Alva.
Dhankhar will be India’s 14th Vice President, taking over from the incumbent Vice President M Venkaiah Naidu. He has served as a Minister of state for Parliamentary Affairs in the Janata Dal government. He became the Governor of West Bengal in July 2019.

Union Government of India has set the target to eliminate Kala-azar from country by 2023. According to Dr Bharati Pravin Pawar (Minister of State for Health and Family Welfare), out of 633 Kala-azar endemic blocks, 625 blocks have successfully eliminated the kala-azar in 2021. India’s target is way ahead than World Health Organisation (WHO)’s target of eliminating the disease by 2030.

Kala Azar is also called as Leishmaniasis. It is a neglected tropical disease, by which over 100 countries are affected, including India. The disease is caused due to parasite called Leishmania. This parasite is transmitted via bite of sand flies.