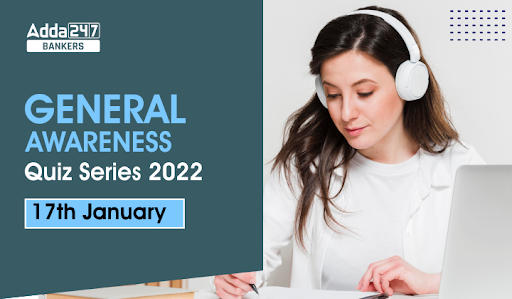 General Awareness Quiz Series 2023: 17th January: Hello Students, General Awareness is an essential part of all government exams. It’s better to prepare this section daily and revise the same using the factsheet provided. Bankersadda team has brought you up a new series in which we will come up with 10 questions and answers, other options of the question have related news to them. So don’t miss reading the solutions

Q1. Where the Business 20 meeting will be held?

Q2. What is the name of the snippets shared by PM Modi for students to prepare for exams?

(c) Your Exam, Your Methods-Choose Your Own Style

Q4. Who has won the media rights of Women’s IPL?

Q5.Shruti amrut has been organized by

Q6. What is the theme of the 53rd World Economic Forum Meeting?

(c) Cooperation in a Fragmented world

Q7. When Womaniya” initiative was launched ?

Q8. Who has made the Guinness world record of  typing copies of 81 books backwards?

Q9. Which state has restored the old pension scheme for its state employees?

Which of the following statements is/are correct?

The first 15 meetings of the Business 20 (B20) India Inception Meeting will be held in Gandhinagar from January 22nd to 24th, 2023

Prime Minister Narendra Modi shared snippets titled “Your Exam, Your Methods-Choose Your Own Style” from the Exam Warriors Book and has urged students to share how they prepare for exams

SPIC MACAY, in association with the Ministry of Culture and the New Delhi Municipal Council, presents “Shruti Amrut,” a new instalment of its wildly popular “Music in the Park” series. Eminent musicians from all over the nation performed to highlight the beauty of Indian classical music.

WEF 53rd edition theme, ‘Cooperation in a Fragmented World,’ is a nod to the tectonic shift in global markets and political relationships that has occurred since the pandemic.

The “Womaniya” initiative was launched in 2019 and has sought to encourage the participation of women entrepreneurs and self-help groups (SHG) from the informal sector on the GeM portal and facilitate the sale of their products directly to various Government buyers, sans intermediaries

Michele Santelia from Italy has achieved a world record by typing copies of 81 books backwards, a technique that he calls ‘mirror writing’, as per a report by the Guinness World Record.

Ray Cordeiro, who interviewed music acts including the Beatles during a six-decade career on Hong Kong radio that earned him the title of the world’s longest-working disc jockey, has passed away.

The Himachal Pradesh government restored the old pension scheme in its first cabinet meeting. The cabinet decided to provide OPS to all government employees.

The world faces a set of risks that feel both wholly new and eerily familiar. The Global Risks Report 2023 explores some of the most severe risks we may face over the next decade. As we stand on the edge of a low-growth and low-cooperation era, tougher trade-offs risk eroding climate action, human development and future resilience.The World Economic Forum taking place in Davos, Switzerland released the 18th edition of the Global Risk Report 2023 based on the 2022-2023 Global Risks Perception Survey (GRPS).