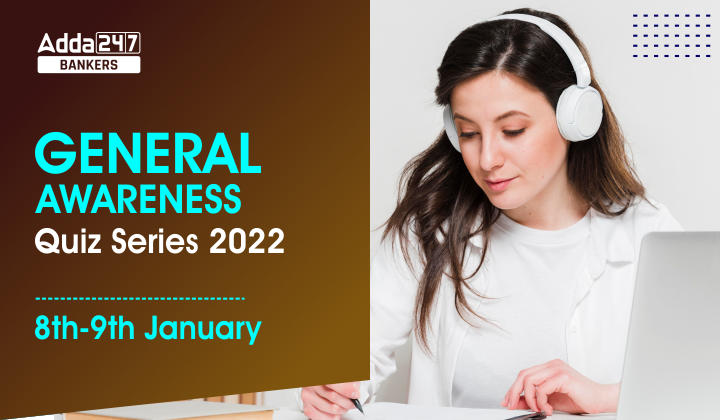 General Awareness Quiz Series 2023: 8th-9th January: Hello Students, General Awareness is an essential part of all government exams. It’s better to prepare this section daily and revise the same using the factsheet provided. Bankersadda team has brought you up a new series in which we will come up with 10 questions and answers, other options of the question have related news to them. So don’t miss reading the solutions

Q1. In the list of top performing global airports according Cirium, which Indian airports came in top ten?

Q2. Which of the following is not themes of Y20 summit launched by the Union Minister of Youth Affairs and Sports Anurag Singh Thakur?

(a) Future of Work

(b) Youth in democracy

Q3. Which of the obituaries is incorrectly matched with their professions?

Q4. Apollo 7 was the first crew flight in space. Which of the following was not part of the crew?

Q5. India surpassed Japan in world ranking of automobile market. What is the rank  of India now ?

Q6.Who has written the book Revolutionaries?

Q7. Which city has topped to be most workplace inclusive for women employment?

Q8. How many monuments in India are centrally protected by ASI?

Q9. Which city police has been awarded the best police unit awards for 2021 in the Maharashtra?

Q10. Who is the parent company of Golden pi Technologies which has become the first online bond provider?

The top 10 top-performing global airports according to Cirium were:

Union Minister of Youth Affairs and Sports Anurag Singh Thakur  launched the themes of Y20 summit, logo, and website in the Curtain raiser event of Y20 Summit India in New Delhi. India is hosting the Y20 summit for the first time. Panel Discussion on “How India can harness its youth population to be a superpower” was also held.

The Y20 is the official youth engagement group for the G20 (Group of 20), the forum for the world’s largest and most advanced economies

Gianluca Vialli, the former Italy and Chelsea striker, has died aged 58 after a long battle with pancreatic cancer

Noted Rabindra Sangeet exponent Sumitra Sen has passed away at the age of 89. She will be remembered for her rendition of songs like Jokhon Porbe Na Mor, Sokhi Vabona Kahare Bole and Mone Ki Dwidha

R Krishnakumar, a close confidante of Ratan Tata and a group veteran, passed away

Walter Cunningham– the last surviving astronaut on that mission who helped pave the way for humans to walk on the moon – died in Houston. Walter was a fighter pilot, physicist and entrepreneur, above all, “he was an explorer

In a major development, India has surpassed Japan in terms of auto sales last year to become the third-largest auto market globally for the first time. First is china and followed by USA

Ministry of Culture has informed the parliament that fifty of India’s 3,693 centrally protected monuments have been missing. The submission of the missing report was done by the Ministry of Culture on 8th December 2022 to the Parliamentary Standing Committee on Transport, Tourism, and Culture as part of a report titled ‘Issues relating to Untraceable Monuments and Protection of Monuments in India.’

Many monuments and sites were lost to activities like urbanization, the construction of dams and reservoirs, and even encroachment. 14 Monuments have been lost due to rapid urbanization; 12 monuments are submerged by reservoirs while 24 are untraceable. There are total of 50 monuments missing