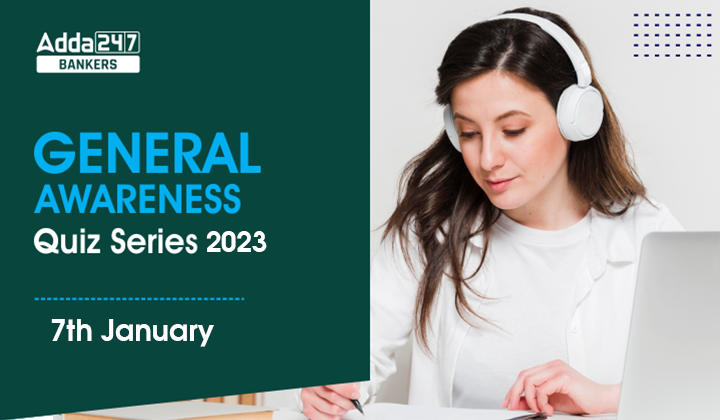 General Awareness Quiz Series 2023: 7th January: Hello Students, General Awareness is an essential part of all government exams. It’s better to prepare this section daily and revise the same using the factsheet provided. Bankersadda team has brought you up a new series in which we will come up with 10 questions and answers, other options of the question have related news to them. So don’t miss reading the solutions

Q1. Who is elected as the chairman of All India Gem and Jewellery Domestic Council (GJC)?

Q2. Which country has approved first ever vaccine for honey bees?

Q3. Which country will have the largest single unit of women Peacekeepers in a UN Mission deployed by India?

Q5. Who is the brand ambassador of Bandhan Bank?

Q8. International Conference on Food and Nutritional Security 2023: – iFANS is organized in which city?

Q9. Which first female cricketer will be having its statue cast in her honour?

Q10. Which of the following news regarding Railways is incorrect?

The All India Gem and Jewellery Domestic Council (GJC) its members have elected Saiyam Mehra as Chairman and Rajesh Rokde as Vice Chairman of the industry body for a period of two years (2023-24).

Folk singer Maithili Thakur was appointed the state icon for Bihar by the Election Commission.

Bank of Singapore (BoS), the private banking arm of Oversea-Chinese Banking Corporation (OCBC), announced that it has appointed Jason Moo as its new CEO.

US has approved the first-ever vaccine for honey bees which will confer protection from the American foulbrood disease, raising hopes of a new weapon against diseases that routinely ravage colonies that are relied upon for food pollination

India will deploy a platoon of women peacekeepers to UN Mission in Sudan. This will be India’s largest single unit of women Peacekeepers in a UN Mission since it deployed the first-ever all-women contingent in Liberia in 2007.

Octave 2023 is a festival being held under the aegis of the South Zone Culture Centre, Thanjavur, Tamil Nadu to showcase the indigenous art and culture of Northeast India

A Medical book ‘Human Anatomy’ in Hindi Manav sharir Rachna Vigyan was released by the Governor of Madhya Pradesh Shri Mangubhai Patel at the function which is a very useful book for the Medical students of all courses related to medical education written by Dr AK Dwivedi.

Australia’s Belinda Clark has become the first female cricketer to have a statue cast in her honour, a bronze sculpture of the trailblazing former captain unveiled outside Sydney Cricket Ground

India’s longest escape tunnel, which is 12.89 km long constructed on the 111 km under-construction Banihal-Katra railway line in Jammu and Kashmir was completed by the Indian Railways