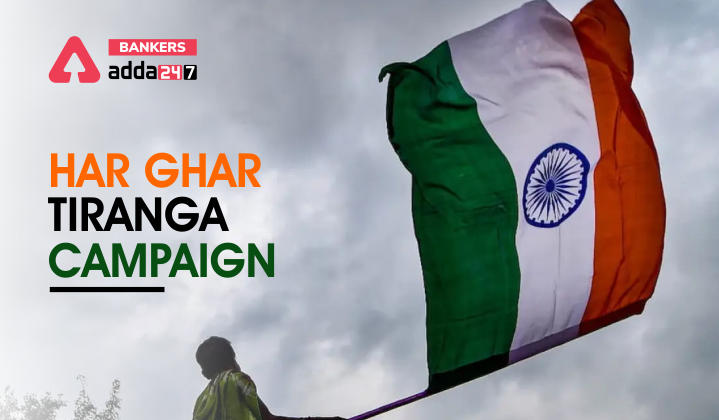 Amit Shah, Minister of Home Affairs requested the people to show their participation with utmost zeal in the Har Ghar Tiranga Campaign and show the world that the people of India are united. People are asked to hoist the National Flag in their homes from 13th August 2022 to 15th August 2022. In this article, we have covered all the detailed information on the Har Ghar Tiranga Campaign.

Har Ghar Tiranga Campaign is an initiative launched by the Respected Prime Minister of India Narendra Modi on the 22nd of July. He asked the people to celebrate the 75th Independence Day by hoisting the National Flag of India at their residences. The poem was composed by our honorable Prime Minister and it has become the theme poem for the Azadi ka Amrit Mahotsav celebration. The lines of the poem are as follows:

To participate in the Har Ghar Tiranga campaign one has to upload their pictures on harghartiranga.com which will help them to get highlighted on the portal. People can celebrate Har Ghar Tiranga Campaign by hoisting the national flag in their homes from 13th to 15th August 2022. Other than this they can also ‘Pin a Flag’ virtually at https://harghartiranga.com, and can also post a selfie with the flag.

Why do we Celebrate Har Ghar Tiranga?

People always maintained a formal relation with the Tiranga. Therefore, The Government of India brought the idea of Har Ghar Tiranga so that people can have a personal relationship with the tricolor and build a feeling of making contributions towards nation building.

Pingali Venkayya designed the National Flag of India and in 1921 during the session of the All India Congress Committee in Vijaywada presented the tricolor to the Father of the Nation-Mahatma Gandhi. The Ministry of Culture has organized the Tiranga Utsav to celebrate the 146th birth anniversary of Pingali Venkayya. To mark the birth anniversary, the Government of India also released a special commemorative postage stamp. The present form of the Flag of India was adopted during the meeting of the Constituent Assembly conducted on 22nd July 1947. Our national flag must be rectangular in shape and its length-to-width ratio must be 3:2. The National Flag of India is made of three colors. The top band is of Saffron color signifying the strength and courage of the country. The middle band of the tricolor is white in color that indicating peace and truth. The last band of green in color signifies the fertility, growth and auspiciousness of our motherland. The Chakra represents the “wheel of the law” that is present in the Sarnath Lion Capital. This great monument was made by the Mauryan Emperor Ashoka. The chakra imparts the message that there is life in movement and death in stagnation.