The IB ACIO Exam dates are finally out. The exam is scheduled to be held on 18th, 19th, and 20 February 2021. The admit card for the same will be live on 15th February which the candidates can download to check their respective exam details. We hope that all the students are going well with their examination, and today in this article we will provide you the exam analysis of the previous year of IB ACIO exams that will the candidates an overview of the upcoming examination.

Before jumping onto this year’s IB ACIO Exam Analysis, it is very important for us to Look at the previous year’s exam analysis To know the trend that the intelligence bureau has been following for its IB ACIO Exams.  candidates will also get to know about the sections in which they can score and also the sections that can be challenging.

The quantitative aptitude section 2 was of a moderate difficulty level.More than 15 questions out of 25 were based on time and distance topic. There was a substantial decrease in the number of attempts in this section.

This was the easiest section in the IB ACIO Exam 2017. According to the review of the candidates who appeared for this exam, most of them attempted all the questions.

The IB ACIO Exam 2015 was conducted on 22 February 2015. The overall level of this examination was easy to moderate. The exam had 60 questions from the general awareness section while the rest of them were from reasoning, numerical ability, and English. The IB revised the exam pattern of IB ACIO after this year’s exam. Let us look at the section-wise analysis of the IB ACIO Exam 2015:

English language section was of moderate difficulty level. The majority of the questions were from the reading comprehension topic.

The quantitative aptitude/numerical ability was lengthy and challenging. Candidates faced problems in solving the questions.

The general awareness section consisted of 60 questions which mean

That the general when a section carried the highest weightage of marks. 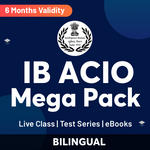 As per the IB ACIO Exam that was conducted in the years 2017 & 2015, it is clear that countries have to strictly focus on the general awareness section. The number of questions and the difficulty level is prime in this section which means that it requires the candidate to have thorough knowledge about General Awareness to ensure scoring maximum marks.