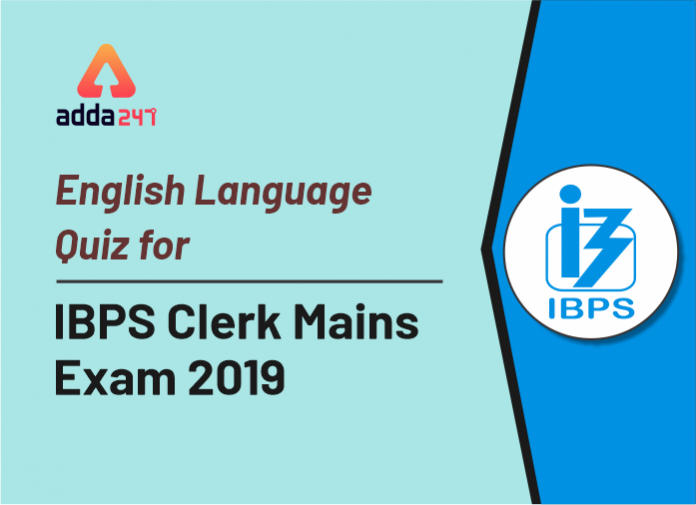 Prepare yourself for the upcoming IBPS Clerk Mains Examination. Aspirants need to ace their preparation as there is not much time left. Bankers Adda is with you at this crucial time of preparation by providing  English Language  Daily mock. Here is  English Questions for IBPS Clerk Mains Exam, to boost your preparation and score well. This Quiz contains Miscellaneous topics like Comprehensive ability and Cloze Test Practice Set

Q1. Farooq Abdullah on Thursday said if his party was voted to power (I)/ in the coming Assembly elections, “regional autonomy shall be (II)/ granted in J&K within 30 days of forming the government” (III).
(I) Farooq Abdullah in Thursday saying if his party were voted to power
(II) in the coming Assembly elections, “regional autonomy will be
(III) grant in J&K for 30 days of form the government
(a) Only (I) & (III)
(b) Only (II) & (III)
(c) Only (II)
(d) None of the (I), (II) and (III)
(e) No correction required

Direction (6-15): Given below is a paragraph consisting of blanks. Identify the correct option among the five alternative pairs that should fill the blank against the number to make the paragraph contextually meaningful and grammatically correct.
President Donald Trump’s decision to pull U.S. troops out of Syria has predictably _____(6)_____ both the Washington establishment and America’s global allies. Within a day of the announcement, Secretary of Defense James Mattis quit, while allies say the move would affect the battle against the Islamic State in Syria. Mr. Trump, however, appears _____(7)_____. Bringing soldiers back to the U.S. was a campaign _____(8)_____. Earlier this year he had wanted to exit Syria but delayed the decision amid _____(9)_____ within his cabinet. Now he claims that the physical infrastructure of the IS caliphate is _____(10)_____ and the U.S. can leave the war against the _____(11)_____ of the jihadist group to the Syrian government and its main backers, Russia and Iran. On the face of it, there is a strategic argument in Mr. Trump’s decision. The caliphate is actually destroyed — the IS has lost 95% of the territory it once controlled and is now _____(12)_____ to narrow pockets on the Iraqi-Syrian border. The U.S. would also not like to get _____(13)_____ in Syria forever. It is basically Russia’s war. The U.S. is already _____(14)_____ in Afghanistan (for 17 years) and Iraq (over 15 years) without a way out. After these interventions, Presidents have been wary of deploying “boots on the ground” in West Asia. Barack Obama had pulled back most U.S. troops from Iraq and Afghanistan. Mr. Trump wants to get out of the Syrian theatre. But the ground reality is too complex and _____(15)_____ Mr. Trump to be more patient and strategic in his policymaking.

S1. Ans. (c)
Sol. There is an error in the part (II). The helping verb ‘shall’ cannot be used with the subject ‘regional autonomy’. ‘Shall’ is only used with ‘I’ and/or ‘We’ under certain conditions. ‘shall’ should be replaced by ‘will’.
The statement (II) provides the correct corrections.
Hence, option (c) is the correct answer.

S3. Ans. (e)
Sol. The given sentence is grammatically and contextually correct and doesn’t require any correction.
Hence, option (e) is the correct answer.

S4. Ans. (b)
Sol. There are errors in the parts (I) and (II).
In the part (I), the form of the verb ‘hided’ is incorrect. The context of the sentence demands that the tense of the sentence is ‘Present Continuous’ and the finite verb ‘hide’ for the subject ‘Antibiotic-resistant bacteria’ should have the form ‘hiding’.
In the part (II), the preposition ‘for’ is incorrect as per the context of the sentence. The correct preposition to be used is ‘in’.
Hence, the correct answer is the option (b).

S6. Ans. (c)
Sol. Perturb [verb] means ‘make (someone) anxious or unsettled; upset’;
The hint for the answer can be derived from understanding the context of the second sentence ‘Within a day of the announcement, Secretary of Defense James Mattis quit, while allies say the move would affect the battle against the Islamic State in Syria’. The presence of the words ‘quit’ and ‘affect’, both of which have a negative connotation suggests that the decision of Donald Trump to pull U.S. troops out of Syria would have negatively impacted the Washington establishment and America’s global allies.
Among the given alternatives, the words ‘upset/perturb’ provides the correct contextual sense to the blank and also satisfy the grammatical requirement imposed on the blank.
Hence, option (c) is the correct answer.

S7. Ans. (e)
Sol. Unfazed [adjective] means ‘not worried or perturbed; placid’;
Apathetic [adjective] means ‘showing or feeling no interest, enthusiasm, or concern; uninterested’;
The hint for the words filling the blank can be derived from understanding preceding sentences and the presence of ‘however’ in the sentence where the blank appears.
The presence of ‘however’ suggests that Mr. Trump is not bothered with the Washington establishment and America’s global allies expressing their disapproval over his decision.
Among the given words, the words ‘unfazed/placid’ provides the correct contextual and grammatical sense to the blank.
Hence, option (e) is the correct answer.

S8. Ans. (e)
Sol. The preceding sentences suggest that Mr. Trump has called for bringing the U.S. soldiers back from Syria. The current sentence where the blank attempts to relate ‘bringing the U.S. soldiers back to the U.S.’ with a ‘campaign __________’. Among the given options, the words ‘promise/pledge’ provide the correct contextual and grammatical sense to the blank.
Hence, option (e) is the correct answer.

S9. Ans. (a)
Sol. Vigour [noun] means ‘physical strength and good health; healthiness’;
Lethargy [noun] means ‘a lack of energy and enthusiasm; inactivity’;
Guilt [noun] means ‘the fact of having committed a specified or implied offence or crime; iniquity’;
The sentence where the blank appears has two clauses connected by ‘but’. The first clause suggests that ‘Mr. Trump had wanted to exit Syria earlier’. The next clause, preceded by ‘but’ and where the blank appears, suggests that Mr. Trump had to delay his decision because of _______ within his cabinet.
Among the given alternatives, the words ‘resistance/aversion’ provide the correct contextual and grammatical sense to the blank.
Hence, option (a) is the correct answer.

S10. Ans. (d)
Sol. Mr. Trump, the U.S. President, is moving the U.S. soldiers, fighting against the IS caliphate, out of Syria. What plausible argument could Mr. Trump give? The hint for the answer is given in a later sentence ‘The caliphate is actually destroyed…’ Among the given alternatives, the words ‘destroyed/ruined’ provide the correct grammatical and contextual sense to the blank.
Hence, option (d) is the correct answer.

S11. Ans. (b)
Sol. Platitude [noun] means ‘a remark or statement, especially one with a moral content, that has been used too often to be interesting or thoughtful; banality’;
Remnant [noun] means ‘a part or quantity that is left after the greater part has been used, removed or destroyed; leftover’;
The preceding clause mentions that the physical infrastructure of the IS caliphate is destroyed and now, the U.S. want to leave the war against the leftovers of the jihadist group to the Syrian government.
Among the given alternatives, the words ‘remnants/leftovers’ provide the correct contextual and grammatical sense to the blank.
Hence, option (b) is the correct answer.

S12. Ans. (c)
Sol. Constrict [verb] means ‘make narrower, especially by encircling pressure’;
The clause where the blank appears is preceded by another clause connected by ‘and’. The preceded clause says that the IS has lost 95% of the territory it once occupied and is now ________ to narrow pockets on the…’. Among the given alternatives, the word ‘confined/constricted’ provides the best grammatical and contextual sense to the blank.
Hence, option (c) is the correct answer.

S13. Ans. (b)
Sol. Sapped [sap, verb] means ‘gradually weaken or destroy (a person’s strength or power); erode’;
Blamed [blame, verb] means ‘assign the responsibility for a bad or unfortunate situation or phenomenon to (someone or something)’;
Qualified [qualify, verb] means ‘be or make properly entitled to be classed in a particular way; counted’;
Stuck [stick, verb] means ‘be fixed in a particular position or unable to move or be moved’;
Linger [linger, verb] means ‘stay in a place longer than necessary because of a reluctance to leave’;
From the context of the preceding sentences, it can be understood that the U.S. does not wish to remain in Syria forever. Among the given alternatives, the words ‘stuck/lingered’ provide the correct grammatical and contextual sense to the blank.
Hence, option (b) is the correct answer.

S14. Ans. (a)
Sol. Ambivalent [adjective] means ‘having mixed feelings or contradictory ideas about something or someone; equivocal’;
Prodigal [adjective] means ‘spending money or using resources freely and recklessly; wastefully extravagant; extravagant’;
Impudent [adjective] means ‘not showing due respect for another person; impertinent’;
Stranded [adjective] means ‘left aground on a shore’; grounded;
The context of the preceding sentence provides hint for the words which would fill the blank. The U.S. would not like to get stuck in Syria. The presence of the ‘already’ in the sentence where the blank appears suggests that the U.S. is currently reluctantly present in Afghanistan and Iraq.
Among the given alternatives, the words ‘stranded/grounded’ provide the correct contextual and grammatical sense to the blank.
Hence, option (a) is the correct answer.

S15. Ans. (d)
Sol. Among the given words, the words ‘requires/needs’ provide the correct contextual and grammatical sense to the blank.
Hence, option (d) is the correct answer.