IBPS Clerk Mains exam will be held tomorrow 19th January. So, Students, you must be giving the final touch to your preparation. Today’s Quiz based on some important topics-Triangular Puzzle, Input-Output, Logical, which will probably ask in IBPS Clerk Mains Exam.

Q9.Statement: Should Former Indian players, who have played for India on International level, be allowed to work as coach for the team of other countries?
Arguments:
I. Yes, that experience which does not harm one’s nation must be used to benefit others.
II. No, this will put the prestige of the country in danger because these coaches will reveal our team’s weaknesses to other teams.

Q10.Statement: Should the Indian government launch community-based programme with focus on the mother’s care?
Arguments:
I. Yes, the mother plays a big role in child’s good health and if the programme is community-based it will have immense impact on the poor nutritional condition of the child in India
II. No, it will harm the secular status of the country.

Solution (1-5):
(i)- A sits second to the left of the one who likes banana. Only two persons sit between C and D. D sits middle of the side and likes orange. Neither F nor C likes banana. There are two possibilities- 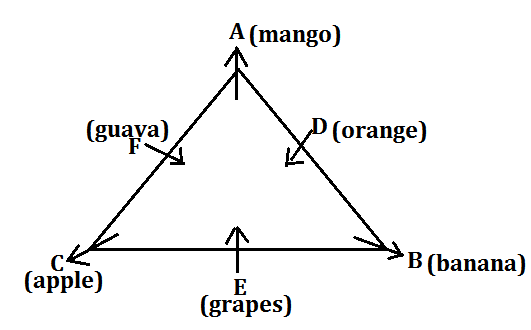 S9. Ans.(a)
Sol. I is strong because it fosters sportsman spirit. II is a weak argument because the weakness of a team is known not only to its former players.

S10. Ans.(a)
Sol. Only I is strong because nutritional condition of a child is directly related with the role of a mother and if the programme is community-based its result will be remarkable. II is a weak argument because it is a misinterpretation of the work ‘community’.