Directions (1-5): Study the following information carefully and answer the questions given below:
Eight persons are sitting in two parallel rows facing each other. A, B, C and D are sitting in row 1 are facing south and W, X, Y and Z are sitting in row 2 and are facing north. Four of them likes fruits i.e. Papaya, Apple, Grapes and Guava. No two persons who likes fruits are sitting adjacent to each other and opposite to each other.
B sits second to the left of A. B faces the immediate neighbor of Z who sits at one of the extreme end of the row. C faces Y. W sits second to the left of X. B likes Papaya. Z likes Apple. The one who likes Guava does not face in the south direction.

Q4. Which of the following statement is true?
(a)Y likes Grapes
(b)The one who faces X likes Papaya
(c)None is true
(d)A sits immediate left of C
(e)X sits second to the left of W

Q6. Statements:
Only a few states is country.
Some country is city.
All city is village
Conclusions:
I. All country can be city
II. All states can be country

Q7. Statements:
Some Sania is Sindhu
No Sindhu is Player
All Player is India
Conclusions:
I. Some Sindhu can be India
II. Some Sania is not player

Q8. Statements:
Only a few states is country.
Some country is city.
All city is village
Conclusions:
I. All country can be states
II. Some village can be country

Q10. Statements:
All flower is fruit
All fruit is chocolate
No chocolate is drink
Conclusions:
I. Some flower can be chocolate
II. Some fruit can be drink

Q13. If A and B interchange their positions, then who among the following sits second to the left of B?
(a)C
(b)D
(c)E
(d)F
(e)None of these

Q14. Which of the following statement is true?
(a)F faces towards the center of the table
(b)C sits immediate right of F
(c)A faces outside the center
(d)None is true
(e)E sits second to the left of D

Q15. If the persons sit according to the English alphabetical series starting from A in the clockwise direction, then the position of how many does not change, excluding A?
(a)None
(b)Two
(c)One
(d)Three
(e)Four 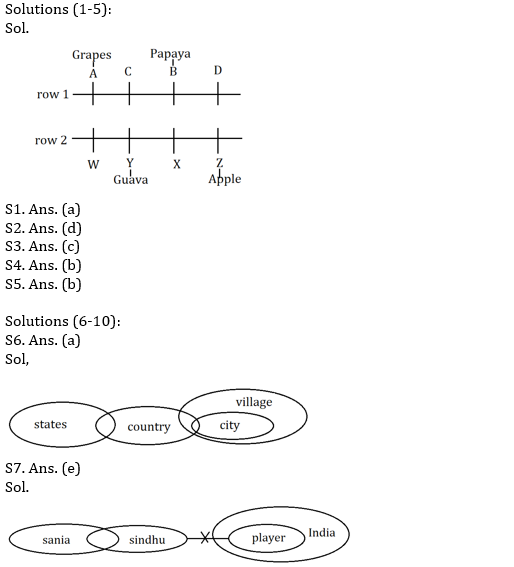 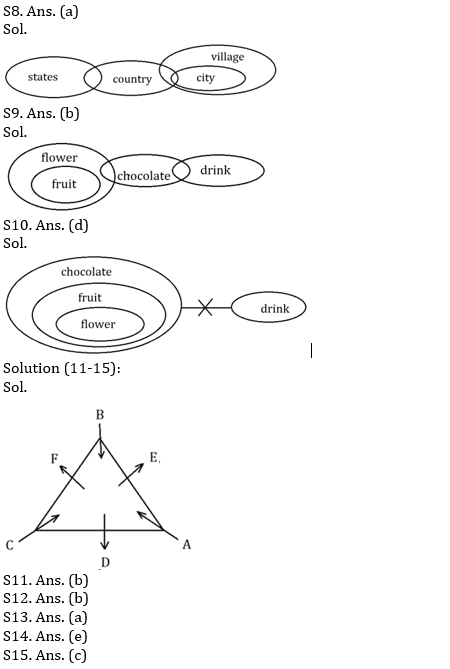