Directions (1-5): Study the following information carefully and answer the questions given below:
Eight friends A, B, C, D, E, F, G and H are sitting around a square table in such a way that four of them sit at four corners of the square and face inside while four sits at the middle of each of the four sides and face outside. Each of them born on different dates of the same month, viz. 5, 11, 13, 15, 18, 21, 26 and 29 but not necessary in the same order.
B sits third to the right of the one who born on 29. B born on an even date. C born on 26 and sits opposite to A. C sits immediate right to the one who born on date 29. A doesn’t sit at the corner. H sits opposite to F and the sum of the dates on which they were born is 26. Only two persons sit between F and G who born on date 11. C is an immediate neighbour of E and the one who born on 21. The difference between the dates on which C and A were born is 11.

Q6. Statements:
Only a few white are pink.
Some pink is green.
All green are blue.
Conclusions:
I. No Blue is White
II. Some Pink is Blue.
III. All Pink is White is a possibility
(a) Only I follows
(b) Only II follows
(c) Only III follows
(d) Both II and III follow
(e) All follows

Q8. Statements:
Some rose are leaf.
Only a few leaf is fruit.
No rose is blue.
Conclusions:
I. All Rose is Fruit is a possibility
II. Some Leaf is not blue
III. No Blue is Fruit
(a) Only I follows
(b) Both I and II follows
(c) Only III follows `
(d) Either I or III follows
(e) None of these

Q9. Statements:
All paints are candle.
Some candle is light.
No paint is image.
Conclusions:
I. All Candle is image
II. Some light is paints.
III. All image is candle is a possibility.
(a) I and II follow
(b) Only III follows
(c) I and III follow
(d) All follow
(e) None of these

Q10. Statements:
All Tea are Milk.
Only a few Milk is Water.
All Coffee are Milk.
Conclusions:
I. Few Coffee are water.
II. All tea is coffee
III. All water is milk is a possibility.
(a) I and II follow
(b) I and III follow
(c) Only III follow
(d) All follow
(e) None of these 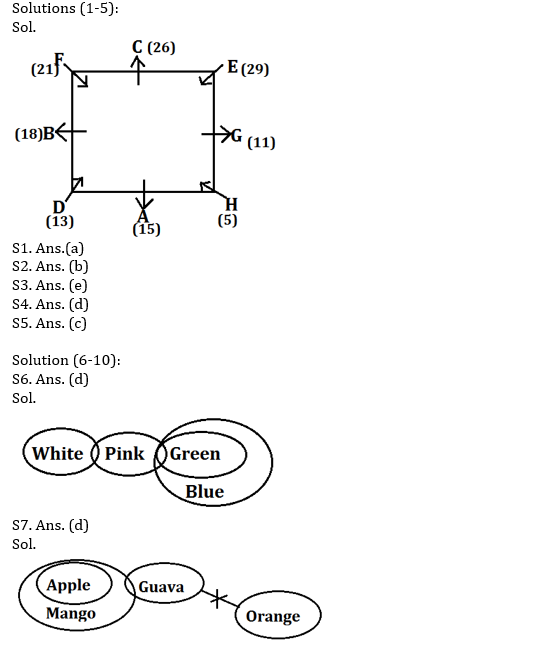 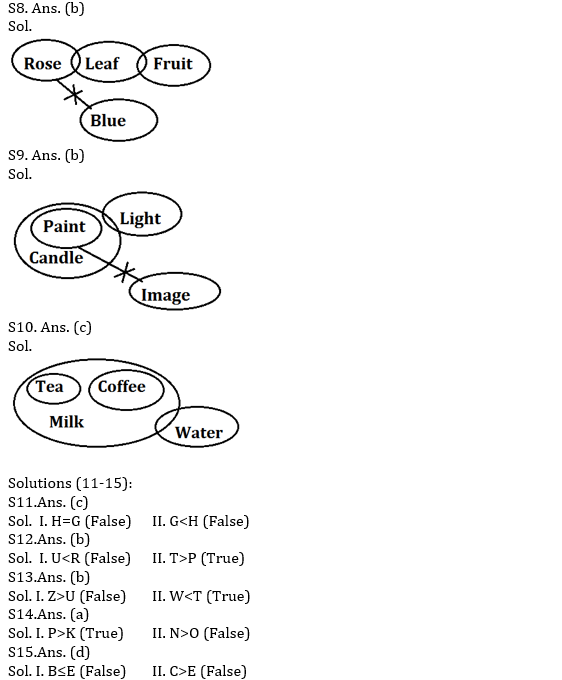