Do you follow a proper plan or strategy for IBPS RRBPrelims 2019? Are you aiming IBPS RRB 2019 this time? If yes, then this is the section which can help you to do wonders if practiced well. A good attempt with a mix of accuracy can help you fetch good marks. The reasoning is a game of wits and mind. It is all about logics that a question may have. Speed and accuracy are what that matters the most in this section. The only way to achieve an ambitious goal is by practicing only. So, attempt the quiz of Reasoning ability that inculcates the important questions from the important topics. Do not miss out to practice the Reasoning ability quiz that is being provided on bankersadda.

Directions (1-5): Study the information and answer the given questions:
Eight persons are sitting around a circular table. Some of them are facing inside the center while some are facing outside the center. F sits third to the left of L. G sits third to the right of M who is facing inside the center. E sits second to the left of G. Both K and H sits immediate left to each other. Only two persons sit between E and I. F faces same direction as H but opposite to L. K sits second to the left of E. K and I facing same direction but opposite to G.
Q1. Who among the following person sit immediate right of K?

G
H
M
F
None of these
Solution: 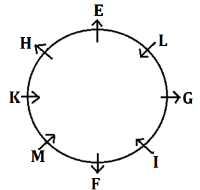 Q2. How many persons sit between I and K, when counted left of I?
Three
One
Four
Two
None
Solution:

Q3. Who among the following person faces M?

L
G
E
F
None of these
Solution:

Q4. Which of the following statement is true about H?

L sits third to the right of H
F is an immediate neighbour of H
H faces inside
H sits immediate left of the one who sits second left of G
None of these
Solution:

Q5. What is the position of E with respect to F?

Q
U
R
S
None of these
Solution:

12. If U have 48 candies, then what is the possible number of candies S have?

Q13. Who among the following have third lowest number of candies?

U
R
S
P
None of these
Solution: