Directions (1-5): Study the following information carefully and answer the given questions:
Seven Student A, B, C, P, Q, R and S plays different games from Monday to Sunday. The different games are Hockey, Cricket, Badminton, Archery, Golf, Football and Tennis, but not necessarily in the same order.
C plays Cricket and not more than two students plays after C. S plays on Wednesday but not Football. R plays Badminton but before the one who plays Hockey. P plays just before B, who plays Golf. Q plays Tennis after C. P does not plays on Thursday. A neither plays on Friday nor Sunday.

Q4. Which of the following play conduct on Thursday?
(a) Archery
(b) Golf
(c) Hockey
(d) Badminton
(e) None of these

Directions (6-10): Study the following arrangement to answer the given questions

Q8. How many such numbers are there in the above arrangement, each of which is immediately preceded by a vowel and immediately followed by a consonant?
(a) One
(b) Two
(c) Three.
(d) More than four
(e) None

Q12. If the digits of the number “46752983” are arranged in increasing order form left to right within the number, then how many digits will remain on the same position after the applied operation?
(a) Two
(b) One
(c) Three
(d) Four
(e) None of these

Q14. Who among the following is lighter than G? If it is given that each of the given friends A, J, G, D and M has a different weight. G is heavier than D, who is not the lightest. A is lighter than only J and heavier than M.
(a) Only D
(b) Only A
(c) Only M and D
(d) Can’t be determined
(e) None of these

Q15. How many such pairs of letters are there in the word COMPETITION each of which has as many letters between them as in the English alphabet?
(a) One
(b) Four
(c) Two
(d) Three
(e) More than four 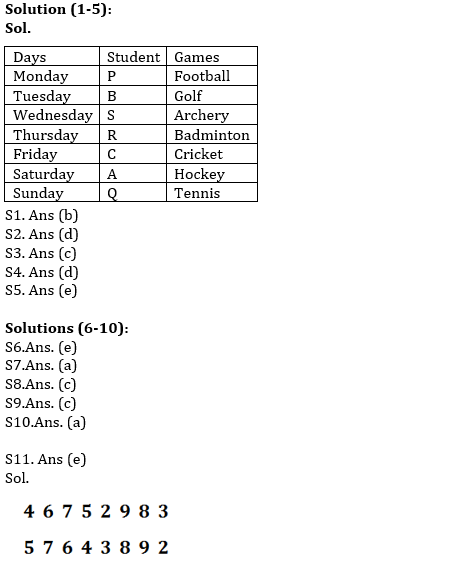 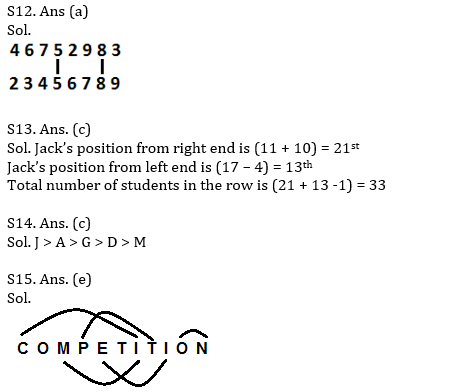