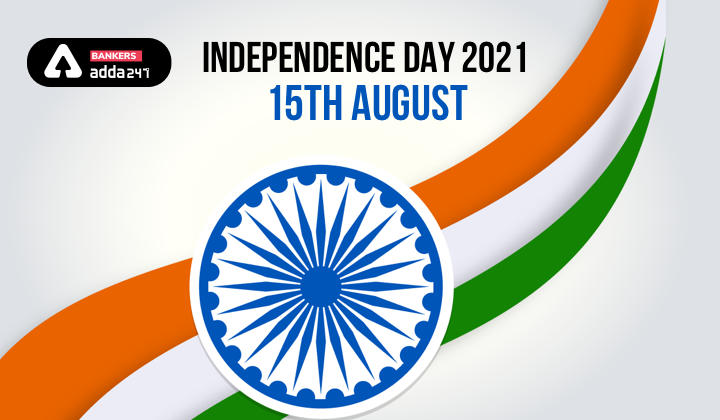 Independence Day 2021: This year India is going to be celebrating its 75th anniversary of Independence on 15th August 2021 so let us get together to pay tribute and to remember the sacrifice and struggle of our brave heroes in the fight for freedom. Since Independence, India has come across unbelievable progress in every field whether it is agriculture, education, science, or security. Now it is impossible for anyone to come and rule over us. Team bankersadda wishes you all a very happy Independence Day 2021. To know more about Independence Day, read out the complete article.

In 1619, Britishers entered India for trading purposes in Surat and Gujarat. British colonizers got their control over the nation after their victory of the English East India Company at the Battle of Plassey in 1757. For almost 200 years, Indians were dominated by the British government which began in 1757. Indian history is full of many riots, retaliation, uprisings, and downfall before it eventually drove the Britishers out and forced Lord Mountbatten to leave India on August 15, 1947, and the powers were again transferred to the Indians.

The day is also remembered for divide and rule policy as British-ruled India was parted into two countries, India and Pakistan on the eve of 14 August 1947, which was the main motive of the Britishers. This partition led to unrest in violence between Hindus and Muslims, which is still going on.

Being slaves for almost 200 years and claiming back our nation as “Free India” makes us proud of our great leaders who died for the sake of our lives. Independence Day is a yearly reminder of the sacrifices of our brave freedom fighters and heroes who stood up fearlessly against the British colonizers and even suffered harsh consequences so that the upcoming generations of Indians could breathe in free air without any domination over them.

How Did We Celebrate this Day for the First Time?

In the early morning of August 15, 1947, our first Prime Minister of Independent India Jawaharlal Nehru unwrapped India’s tricolor flag at the historic monument “Red Fort” in Delhi. This practice is continued to date as along with the flag hoisting, the Prime Minister delivers a speech and various other events are performed to give respect to the freedom fighters.

Q1. Which Independence Day are we going to celebrate this year?

Q2. Is there a huge celebration going to happen in Red Fort like every year?

Ans. No, due to the precautionary measures regarding coronavirus, this year only the hoisting of the flag will be done at Red Fort without any grand celebration.

Q3. Who hoisted the Indian tri-color flag for the first time after Independence?

Ans. Prime Minister Jawaharlal Nehru who was the first Prime Minister of Independent India, hoisted the flag which symbolizes our freedom on 15th August 1947.

Q4. When did Britishers enter India?

Ans. In 1619, Britishers entered India with the excuse of trading in Surat and Gujarat.

Q5. How it was possible for Britishers to rule over India?

Ans. After their victory of the English East India Company at the Battle of Plassey in 1757, Britishers started ruling India.