The nationwide lockdown 3.0. begins for 2 more weeks starting from 4 May 2020. Many activities have been resumed in the green zones and from 4 May onwards the new guidelines by the Ministry of Home Affairs comes into effect. The Ministry of Home Affairs on 1 May released a complete set of instructions on activities that are allowed in all red, orange and green zones along with what is complete prohibitted in these zones during lockdown 3.0. The coronavirus case count in India is increasing day by day and has crossed the 37,000 mark already. In this article we will be sharing state-wise list of red, orange and green zone districts of COVID-19 outbreak, and you can also check the guidelines by MHA given below:

Press Release on extension of lockdown and issue of new guidelines 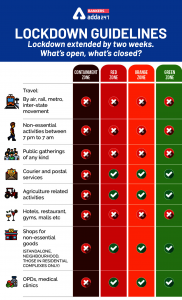 How Red, Orange and Green Zones are identified?

The following are the guidlines the government has stated to classify 733 districts of India into three zones- Red, Orange and Green:

These are areas with maximum risk- the classification of districts as Red Zones will take into account the total number of active cases, doubling rate of confirmed cases, extent of testing and surveillance feedback from the districts.

Districts that are neither red or green will be considered orange zones with moderate risk. The Ministry of Home Affairs has mentioned that in case a district is orange zone and there is no confirmed case in the area of the district outside the limits of the Municipal Corporation, this area may be then labeled as Green Zone.

The Ministry of Home Affairs has stated that Containment Zones sall be demarcated with Red and Orange Zones and intensive surveillance mechanisim as outlined in the standard operating protocol (SOP) issued by Ministry of Health and Family Welfare is to be established withing that area. The local authorities in containment zone will ensure 100% coverage of Aarogya Setu App omong the residents.

DADRA AND NAGAR HAVELI AND DAMAN AND DIU