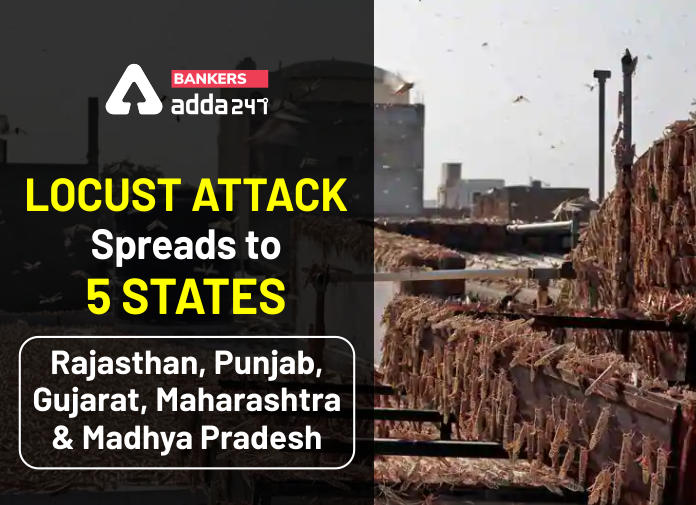 Locust Attack in India- Authorities in Delhi, Haryana, Himachal Pradesh, Telangana and Karnataka sounded alerts and United Nation’s Food and Agriculture Organisation (FAO) has warned that the crop-destroying insects could reach Bihar and Odisha in the east in the coming weeks. We have not yet done with the Coronavirus and some states in India are grappling with the Locust attack. This desert locust of short-horned grasshopper are known to destroy everything in their path, causing harm to food supplies and livelihood of people. Millions of locusts have attacked 100 districts in five stated and it is also being reported that another swarm is expected to enter India from Pakistan in around mid-June. As per the Food and Agriculture Organization’s Desert Locust Information Service bulletin, locusts can fly up to 150 km a day and a one-square-kilometre swarm can eat as much food as 35,000 people in one day. To know complete about the locust attack and the states its harming, read the complete article.

Its been over weeks, many countries have been observing Locust attack and declared it as an emergency condition. The Locust attack is alarming in the horn of Africa, the red sea area, and southwest Asia. In India, it entered from the desert area of Pakistan and has been causing huge damage to the standing crops in some states of India. These swarms of locust have not only reached Rajasthan and Gujarat but have also migrated to Punjab, Madhya Pradesh, and Maharastra.

Delhi goverment has issued an advisory to deal with the locust attack situation. Authorities have started spreading awareness and are spreading insecticides and pesticides on crops to prevent a probable desert locust invasion. Delhi has around 34,750 hectares of cropped area majority of which is used for commercial horticulture and value-added agriculture activities, like organic farming. Swarms of locust also attack gardens and orchards which exist accross the city, thus this locust attact is a big threat. The Delhi Agriculture Department in an advisory said, “As the swarm of locusts flies in daytime, and rests during the night, it should not be allowed to rest at night.”

Locusts are a group of short-horned grasshoppers and upon traveling through long distances, they multiply in numbers and could be classified as destructive swarms. The swarm of 40-80 million adult locusts could travel up to 150 km in a single and they can damage leaves, flowers, fruits, seeds, bark, and growing points of the plant. They migrate in huge numbers and can the whole area of crops with their massive attack. In India, there are four species of Locusts including Desert Locust, Bombay Locust, Migratory Locust, and Tree Locust. Among all these, the family of the desert locust is found to be the most destructive one, not only in India but throughout the world. A small swarm of desert locust can consume food in the same quantity as 35000 people require. The desert locust usually breeds in semi or arid desert regions as they need bare ground for laying their eggs. 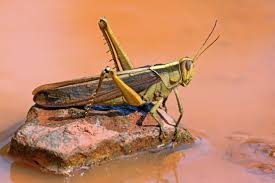 Why Locust attacked India this year?

The movement of the locust is aided due to two meteorological drivers including unseasonal rains and strong westerly winds. This time, it has been found that their migration may be due to the strong westerly winds from the cyclone Amphan which recently took place in the Bay of Bengal. It has also be declared by UNFAO that these waves if invasion could be expected till July in Rajasthan moving forward to Bihar and Orissa, however, after July the directions of the winds would be changed and these swarms locust will be traveling back to Rajasthan.

As the Rabi crops were already harvested and Kharif crops were yet to be sown, the attack swarms have not caused much damage to the crops in India.

What could be more dangerous in the future?

As the current swarms migrating in states of India are still immature and have not yet laid eggs, however, if they start breeding it could be more dangerous. A female locust lays only three times and about 60-80 eggs each time, throughout its 90 days of the life cycle. If this growth exists with that of the Kharif crop, we will have to deal with the situation similar to what maize, sorghum and wheat farmers of Kenya, Ethiopia, and Somalia had already experienced in the month of March-April. 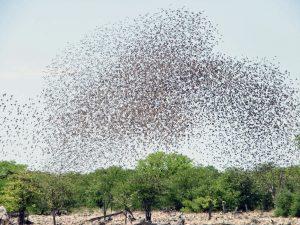 A proactive exercise of insecticide and continuous monitoring of the crops during the ensuing Kharif season could bring down the danger from the Locust attack to some extent.