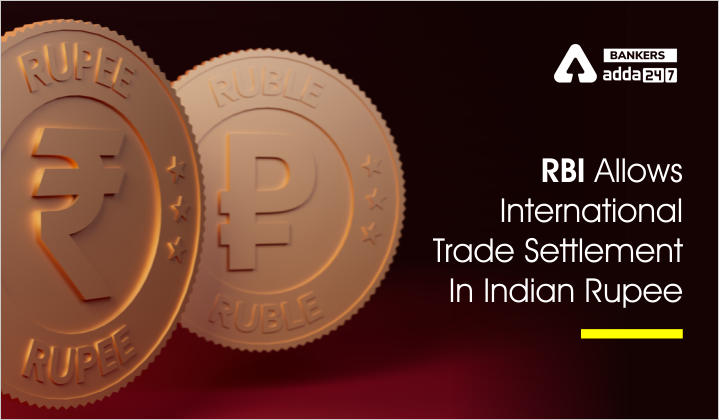 Why this move taken by RBI now ?

RBI Allows International Trade Settlement In Indian Rupee This is to facilitate greater trade in Rupee.

In the RBI’s Words – In order to promote growth of global trade with emphasis on exports from India and to support the increasing interest of global trading community in INR, it has been decided to put in place an additional arrangement for invoicing, payment, and settlement of exports / imports in INR.

Previously, Rupee invoicing was allowed but it was not so popular as surplus Rupee was not allowed to be channeled back into Rupee assets but now they are. For a currency to be globally acceptable, capital flows and trade have to be liberalized hand in hand.

What is International trade settlement in rupees?

When countries import and export goods and services, they have to make payments in a foreign currency. Since the US Dollar is the world’s reserve currency, most of these transactions are entered into US dollars. For example, if an Indian buyer enters into a transaction with a seller from Germany, the Indian buyer has to first convert his rupees into US dollars. The seller will receive those dollars which will then be converted into Euro. Here, both the parties involved have to incur the conversion expenses and bear the risk of foreign exchange rate fluctuations. This is where trade settlement in rupees comes in – instead of paying and receiving US dollars, the invoice will be made in Indian rupees if the counterparty has a Rupee Vostro account.

Why does the RBI want to settle payments in Rupees?

This move will help reduce India’s dependency on US dollars. Experts Business Insider India spoke to suggested that while this decision won’t have a considerable short-term impact, it will benefit the country in the long-term. Moreover, since India runs a trade deficit – its imports are greater than exports – settling trades in rupees will also save dollar outflows. At a time when the rupee’s value is declining every week against the US dollar, saving dollar outflows becomes even more critical for the RBI. Circumventing the SWIFT payments system and paying for imports in rupees would also help India work around the sanctions imposed on its trade partners – Russia being the latest, and Iran is another prominent example from the past. All in all, the decision to allow international trade in rupees is aimed at easing trade with Sri Lanka, which is running low on forex reserves, and Russia, which cannot make payments in US dollars due to sanctions by the West.

Under which act, cross border trade transactions in INR is formulated ?

The broad framework for cross border trade transactions in INR under Foreign Exchange Management Act, 1999 (FEMA). It is as delineated below: