Directions (1-5): Study the following information carefully and answer the given questions.
A, B, C, D, E, F, G and H are seated in a straight line but not necessarily in the same order. Some of them are facing south while some are facing north. E sits 2nd to the left of H. B and G faces same direction. C sits fourth to left of F. A sits at one of the extreme ends of the line and faces south. Both the immediate neighbours of C face north. Neither C nor F is immediate neighbor of A. B sits second to the left of C. Neither C nor F sits at the extreme end of the line. Only two persons sit to the left of D who faces south. People sitting at the extreme ends face the opposite directions (i.e., if one person faces North then the other faces South and vice-versa).

Q7. Which of the following box is placed just below white box?
(a) purple
(b) yellow
(c) black
(d) green
(e) None of these

Q8. How many boxes are placed between white colour box and orange colour box?
(a) One
(b) Three
(c) Two
(d) More than three
(e) None of these

Q9. Which of the following box is placed just above purple colour box?
(a) yellow
(b) blue
(c) green
(d) white
(e)No one 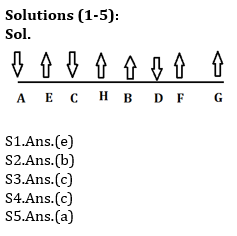 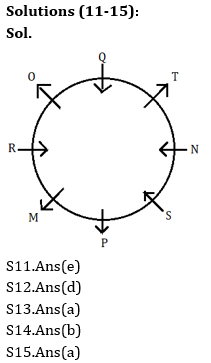