Directions (6-10): Study the following information carefully and answer the questions given below:
Eight persons i.e., R, S, T, U, V, W, X and Y are working in an office. Each person takes one day leave in different days either on 13th or 25th of the four different months i.e., January, February, March and April but not necessarily in same order.
U takes leave before V but doesn’t take leave in the month of 31 days. There are three persons take leave between U and Y. R and S takes leave on prime numbered date. There are as many persons take leave before R as after W. Neither T nor X takes leave on 25th of the month. T takes leave before S and after X.

Q11. Statements: Some Tom is Jerry
Some Jerry is Pokemon
No Pokemon is Mickey
Conclusion: I. All Tom can be Pokemon
II. Some Mickey can be Jerry

Q12. Statements: Only a few Answers are Questions
Some Questions are Solutions
All Solutions are Details
Conclusions: I. All Questions being Answers is a possibility
II. Some Details can be Questions

Q13. Statements: No School is College
No College is Institute
Only a few Institute is Branch
Conclusions: I. All Institute can be Branch
II. Some Branch is not College 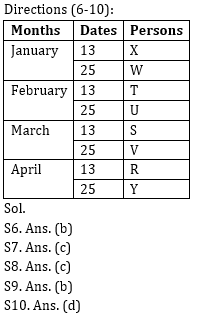 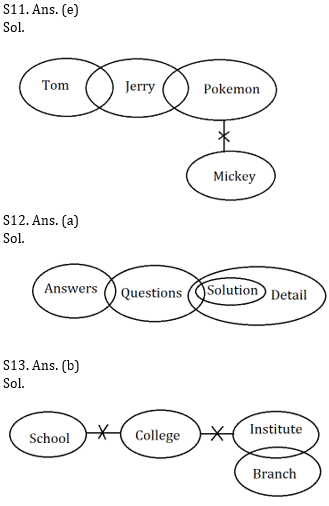