Q4. Which of the following combination is true?
(a) M- Hip-hop
(b) L-Salsa
(c) E-Kuchipudi
(d) G-Bharatanatyam
(e) None is true

Q5. How many persons attend the class before the one who likes Bharatanatyam?
(a) No One
(b) Two
(c) Three
(d) One
(e) Four

Q9. Ravi is 22nd from the left end of a row and Hunny is 32th from the right end of row. If they interchanged their positions then ravi ranks become 21 from left end. How many persons sit between them?
(a) One
(b) Two
(c) None
(d) Three
(e) None of these 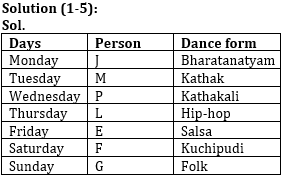