Q8. Who has secured the maximum marks among six friends A, B, C, D, E and F?
I. B secured less marks than A and F but not less than C, D and E.
II. F secured more marks than B but not as much as A.

Q9. Statement: Should only reputed NGOs be authorized to distribute the commodities to the public under the programme of Public Distribution System (PDS)?
Arguments:
I. Yes, the move will be helpful to implement the programme more effectively and will keep a tab on various problems like black marketing of the commodities supplied under PDS.
II. Yes, NGOs have helped government on many occasions.

Q14. After how many steps no further rearrangement of words is possible?
(a) Five
(b) Four
(c) Six
(d) Seven
(e) Eight 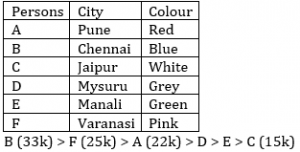 Solutions (9-10):
S9. Ans.(a)
Sol. Only I is strong because it will make the PDS programme more meaningful and purposeful. II is weak because it adds nothing substantial to the statement.
S10. Ans.(a)
Sol. II is weak argument because it wrongly assumes that vacation makes employees lazy and less hardworking. I is strong because lesser vacation ensures higher working days. And no doubt increase in the number of working days will reduce the work pending.