Directions (1-5): Study the information carefully and answer the questions given below.
Seven persons were born in seven different months i.e. January, February, April, May, July, September and December of the same year. Each of them likes different festivals viz. Gurupurab, Christmas, Eid, Diwali, Dussehra, Janmashtami and Holi.
T likes Janmashtami and born in the month of 30 days. Neither S nor R like Holi. Three persons were born between T and the one who likes Christmas. Only four persons born between Q and V and one of them like Eid and other one likes Christmas. P is older than R and none of them likes Diwali. No one who is younger than P likes Gurupurab. S was born in January. U and Q are older than the person who likes Dussehra. The one who likes Diwali is born in the month of 30 days.

Q4. The person who likes Gurupurab born in which month?
(a) May
(b) July
(c) January
(d) February
(e) September 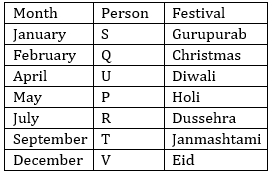 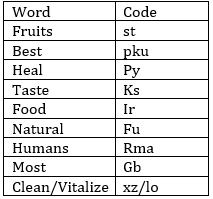