Directions (6-10): Study the following information carefully and answer the given questions.
Seven scientist A, B, C, D, E, F and G belongs to different country Japan, France, Russia, Australia, China, India and Germany but not necessarily in the same order. They are living on a seventh-floor building, lowermost floor is numbered as 1 and topmost floor is numbered as 7. D lives on fourth floor but he neither belongs to China nor Australia. F belongs to Japan and he lives either sixth or third floor. C lives on first floor. E belongs to Germany. B does not live on seventh floor. The one who belongs to Australia lives on second floor. F does not live immediate below G. A lives on fifth floor and he belongs to India. The one who belongs France lives on floor Seventh floor. 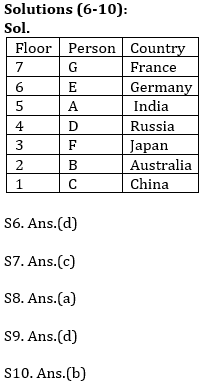