Directions (1-5): Read all the information carefully and answer the given questions:
There are seven friends A, B, C, P, Q, R and U. They live on 7 different floors of a building; lowermost floor is numbered 1 and topmost floor is numbered 7. Also, they like different fruits i.e. Grapes, Banana, Pineapple, Mango, Orange, Guava, and Apple but not necessarily in the same order.
A lives just above R but not on 2nd floor. P lives immediately below the one who likes Orange and he likes Mango. U lives on odd numbered floor and likes Banana. B lives on 4th floor and likes Orange. A likes Apple and R likes Guava. C lives on odd numbered floor above 4th floor and likes Pineapple. R doesn’t live on even numbered floor.

Q5. The one who lives on topmost floor like which of the following Fruit?
(a) Apple
(b) Mango
(c) Guava
(d) Pineapple
(e) None of these

Q7. In a number 471653982 if all digits are arranged in ascending order from left to right within the number then how many digits will remain on the same position?
(a) One
(b) Two
(c) Three
(d) None
(e) Four

Q8. Which of the following is the third letter from the right end of the meaningful word formed from the second, third, sixth and seventh letters of the word “RELUCTANCE’. If more than one word is formed your answer will be Z.
(a)A
(b)E
(c)Z
(d)S
(e)T

Q9. Ravi starts walking towards the east from his home to go to his college. He walks for 10 km in the east, takes a left turn, walks 20 km then turn left and walk 15m and reaches his college. In which direction is her home with respect to her college?
(a) Northwest
(b) West
(c) North
(d) Southeast
(e) East

Q10. Introducing a boy, a girl says, “He is the son of the only sister of my mother’s brother.” How is the boy related to that girl?
(a) Father-in-law
(b) Brother
(c) Cousin
(d) Niece
(e) Nephew 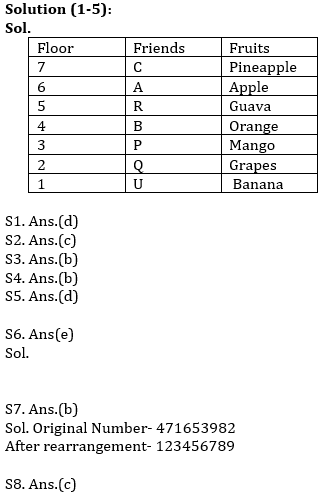 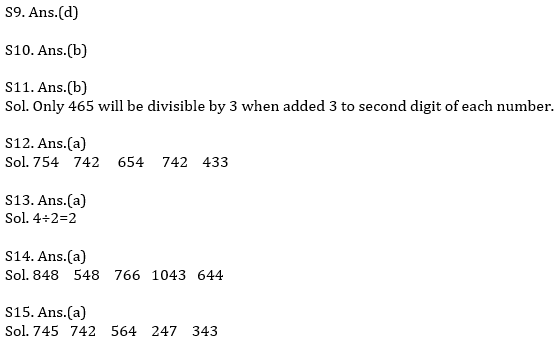