In a SAARC meeting eight delegates A, B C, D, E, F, G, and H of different countries are sitting around a square table facing the centre not necessarily in the same order. Each one of them is belongs to different countries India, Maldives, Pakistan, Sri Lanka, Afghanistan, Nepal, Bangladesh and Bhutan.

5. What is the position of delegate of Pakistan when counted anti-clock wise direction from C?
(1) Immediately to the left
(2) Third to the left
(3) Second to the right
(4) Fourth to the left
(5) None of these

6. Statement: While presenting a stage show in a Saifai (Uttar Pradesh), the famous actor and actress declared that they have a practice of either taking full payment or none for their stage shows.

Assumptions:
I. They took full payment for their recent show.
II. They did not take any money for his recent show.

7. Statement: The Delhi court has directed the government to respond to a PIL alleging that politicians were misusing government’s funds worth crores in the name of sports on advertisement for their publicity.

8. Statement: ‘We are here to announce that you are appointed as a Content Manager with a probation period of six months and your performance will be reviewed at the end of the period for confirmation’ – A line in an offer letter.

Assumptions:
I. The performance of an individual generally is not known at the time of joining.
II. Generally an individual tries to prove his worth in the probation period. 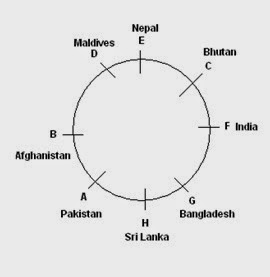 Solutions (6-8):
6. (3) As given in the condition in the statement, the actor and actress either will take the full payment for his recent show or will not take any money for the same. Hence, either of the assumptions follows.
7. (5) Both Course of Actions follows.
8. (5) The performance of the individual has to be tasted over a span of time as the statement mentions. So I is implicit. The statement mentions that the individual’s worth shall be reviewed (during probation period) before confirmation so II is also implicit.