Directions (1-5): Study the information carefully and answer the questions given below:

Q7. Statement (A): A traveler found cockroaches in the crevices of his seat and also in the toilets of India’s most prestigious train, the Rajdhani Express.
Statement (B): He drew the attention of catering manager, Western Railway, to the insects. 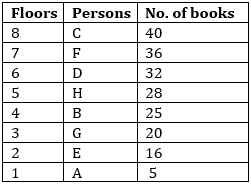 Solutions (6-7):
S6. Ans.(a)
Sol. Because of the statement (B), government has decided to roll back the hike in the prices of cooking gas and kerosene.
S7. Ans.(b)
Sol. As he found cockroaches in the crevices, he immediately drew the attention of the catering manager. So, statement (B) is the effect of statement (A).

S13. Ans. (d)
Sol. From both the given statements, position of point E cannot be determined hence, it is not possible to find the distance between point E from point H.

S14. Ans.(b)
Sol. By using only second statement we can conclude that Some white is not tiger.