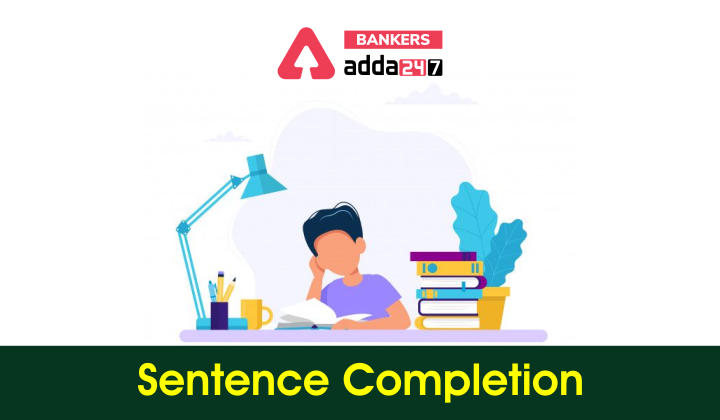 Sentence Completion- It is one of the most prominent topics of the English language section which is asked in all the banking, SSC, Railway, CTET, and State exams. If we talk mainly about the banking exams then sentence completion is asked in SBI PO, SBI Clerk, IBPS PO, IBPS Clerk, RRB PO, RRB Clerk etc. Sentence completion is a topic where the candidate’s grammatical as well as vocabulary knowledge is tested. In the examination, there will be an incomplete sentence having a blank part where you have to put the right answer making the sentence sound meaningful as well as grammatically correct. The level of the sentence completion questions remains easy in the prelims exam while on the hand it becomes difficult to solve in the mains examination of Bank PO exams.

Check the Number of Blanks:

If you have a single blank to complete the sentence, then look for the hints and word charge. If you have more than one blank then it is best you go for backtracking the options and blanks. This helps in easy elimination and answering.

First read the sentence and understand the context that is stated. Then you can attempt to visualize and answer the question but remember, use a word that when filled in, does not change the meaning or the underlying context of the sentence so be very careful.

In English Grammar, the order of words is very important. There is a structure that you need to maintain. This is mostly related to the Parts of Speech. You need to know where to use a noun followed by a pronoun and same goes with adjectives or other parts of speech

Even when you think that the word you choose as the answer is correct, you need to be double sure if you don’t know the exact meaning of the word. In case you go just with your guess you might go wrong and it will be incorrect. Grammar needs to be kept in mind especially in terms of phrase and sentence based questions.

Make it a habit that you first visualize your answer (read the sentence and think of a possible word to fill in). This makes it easy for you to not go wrong and choose the right word that suits your concept.

There might be instances where you find two or more options, sometimes all of the options are synonymous to each other but be very careful. You will have to choose a word that fits correctly in the context given to you.

The most important point to improve your score in sentence completion is increasing and improving your vocabulary.

Directions (1-15): In each of the questions given below an incomplete sentence which must be filled/completed with one of the sentences given below.  Choose the correct option and complete the given sentences.

Q1.The courier company truck ………….. belonging to several jewellers from Agra to Delhi at the time of the incident.

(a) was loaded with fruits

(b) was crossing the road

(e) was about to crash

Q2. Preliminary probe has revealed that she ………… with the prime accused since the past two-and-a-half-years.

(b) was in a relationship

(c) was about to fall in love

(d) was taken into custody

Sol. ‘was in a relationship’– Since, the given sentence ends with the ‘…..past two-and-a-half-years’, it is clear that there was a relationship between the girl and prime accused mentioned.

Q3. The body was taken into custody and police stations of nearby districts …………… her identity

(a) were commanded to reveal

(b) were commanded to conceal

(c) were forced to hide

(d) were ordered to trace

(e) were reluctant to know

Q4. We need data so that various government schemes for different categories ………….. smoothly.

(a) can be implemented

(b) can be debarred

(c) can be executed

(d) can be resolved

(e) can be entered into

Q5. A question on the form asks whether parents of the applicant …………… occupation

(a) are involved in a disguised

(b) are indulged in the illegal

(c) are engaged in a clean

(d) are absorbed in the self created

(e) are engaged in an unclean

Sol. ‘are engaged in an unclean’– the form mentioned in the given sentence simply reflects that it has asked about whether the parents are involved in that unclean occupation

Q6. She added that too much information was being sought in the form and the school could not …………..

(a) find that the students are doing well or not

(b) understand the purpose behind it

(c) discover the reason of mismanagement

(d) understand the politics behind it

(e) analyse the reason of doing so

Q7. The focus has been on finishing the syllabus instead of concentrating on whether the student ………………..

(a) is being able to understand what is being taught

(b) is being able to understand what is not taught

(e) is being able to perform well or not

Q8. The government has reached out to parents to convince them to stay back in Delhi for the ………….. and send their child to school.

(b) whole period of exam

(c) entire duration of the campaign

(e) development of their child

Sol. ‘entire duration of the campaign’- there has been a campaign talked about which is convinced by the government to the parents of the students to be attended and send their child to school.

Q9. He added that the gang would tamper with chassis …………… and re-register them at District Transport Offices in Manipur to sell them.

(a) models of various products

(b) samples along with the catalogue

Sol. ‘numbers of stolen vehicles’– as it is quietly clear from the sentence that there is an offence took place, and option(e) is the only one which reflects the type of crime.

Q10. The woman ………….. on the abdomen and left arm, they said, adding that she was taken to a hospital and discharged after her wounds were stitched.

(a) has retained marks

(b) has sustained injuries

(c) has made tattoo

Sol. ‘has sustained injuries’– as the woman has been taken to hospital and discharged after her wounds were stitched, this clearly shows that she has sustained her injuries.

Q11. For many political parties, having a thinking, educated citizenry is a threat as they rather deal with citizens who are not asking difficult questions or ………….. that society faces.

Sol. ‘analysing problems’– as the sentence ends with ‘….that society faces’, this means the citizens(mentioned) are not asking questions or analysing the problems.

Q12. However, after Arnav’s mother approached the court alleging foul play in the police investigation, the court ordered the police …………….

(a) to register a murder case

(b) to calm the whole matter

(c) to put the mother behind bars

(d) to close the file of case

(e) to resolve the whole issues

Sol. ‘to register a murder case’– as the mother of the victim approached the court alleging that it was a foul play, the court made an action and ordered the police station to register the murder case.

Q13. The High Court on Wednesday warned the Delhi government of attaching its bank accounts if …………… of municipal school teachers in east and north Delhi.

(b) it did not mention the name of

(c) it did not release funds for payment of salaries

(d) it did not organise the school fest

(e) it did not increase the fees of the students

Sol. ‘it did not release funds for payment of salaries’– as the government has warned to attach the bank accounts. Thus, the matter is the financial matter.

Q14. Hot days of the season are here and pet parents should make themselves ………………. that summer can pose for their animals.

(a) avail the opportunities

(b) aware of some of the dangers

(c) aware of the pressures

(d) alert of the happenings

Sol. ‘aware of some of the dangers’– as summer can pose their animals.

(a) get hungry quickly

Sol. ‘dehydrate quickly’– as the context reflects the plenty of water that should be drink by the animals.

Q.1 What is sentence completion?
Ans Sentence completion is one of the topics of the English language section in which a incomplete sentence is given with some blank either at the starting, end or middle of the sentence. In such kind of questions aspirants are needed to put the correct answer in the blank to have a meaningful sentence.

Q.3 Which are the exams in which sentence completion questions are asked?
Ans The sentence completion is asked in most of the competitive exams like SSC CGL, SSC CHSL, SBI PO, SBI Clerk, RRB PO, RRB Clerk, RBI Grade B, NIACL AO, RRB NTPC, UPSC, and State level exams.