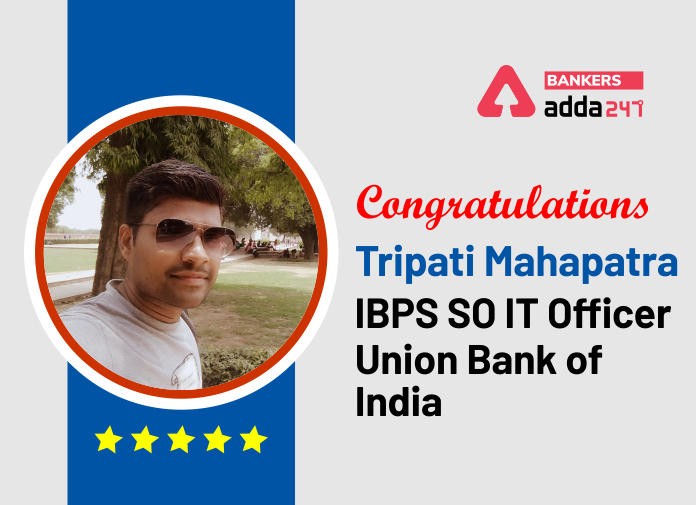 I am Mr. Tripati Mahapatra, an all-time student who has cleared some of the competitive exams in different periods. I’m sharing my journey (which I’m still on at) with you that might give you a sneak peek into the time that I had all these while.

I’m an Engineer by choice and have done my Graduation in ECE in 2014 from a premier institute. At that time I got placed into an Indian MNC (Which is in the top FIVE MNCs in India) with a good package. Like others, I won’t say that I didn’t join it, Instead, I did join that and I worked there for around two years and in this period I have been placed under many projects and at different locations across India (All are metros though) where I got to meet new persons across the globe and have had a wonderful experience.

After some point in time, I felt like I’m missing something and got to realize that I can’t continue the so-called “Corporate LifeStyle” anymore and I called it a Quit. The very first thing I did was I called one of my friends and told him everything and he told me that I may give a try to banking exams which I was completely unaware of. Later I applied for the first competitive exam of my Life which was SBI Clerk and missed the prelims by 0.5 marks and I was prepared from a small book that had 10 years of previous papers for this exam.

To my surprise, I was happy that I got so close, and yeah felt a bit disappointed cause if I would have worked a little bit more I would have cleared it. It took me two months to complete the three basic books twice and now I had a clear fundamental idea on how to solve the questions, but here comes another challenge and that is speed. I was able to do the problems accurately but I was very slow in solving them. Now I switched to online mock exams to speed up my problem solving and to have a clear view of the level of examination in the current scenario.

Many people including my relatives told me that I had made a wrong decision by leaving a good-paying MNC job and I’ll regret it and I’m doing a mistake again by going after bank exams.

In the meantime, I had appeared in almost all kinds of competitive exams be it technical or non-technical and I have failed in every single exam, whose count is more than 35.

Long story cut short; In 2017, I cleared IBPS Clerk prelims with 98.5 Marks and IBPS PO Prelims with 87.5 marks. Now, this was the time where I should be more serious about the preparation and I was afraid as I had no idea from where and how should I prepare for the “General Knowledge” part as I don’t like this part and am very bad at memorizing these.

Here comes the power-packed tool from Adda247’s (formerly known as Bankersadda) “GA Power Capsule”. Honestly, this is the only thing that helped me clear above two exams in a positive way as almost all parts are covered in this and around 70 to 80 percent of GA questions that are asked in the exam are covered in it and you can answer them for sure, if you have been through it at least twice with full concentration though.

The online YouTube classes by Adda247 covering English, reasoning, aptitude helped me a lot in clarifying my doubts and helped me in speeding up my skills in solving those types of questions accurately. I would ask you to go for their online youtube classes as they’re completely free and full of content as well, also you’ll be able to learn a new type of questions/tricks/ways to solve the modern problems that are being asked in the exams.

Now it was April 1st, 2018, and I was eagerly waiting for the results and it came. I was selected in the clerical cadre in “Andhra Bank” (Now Union Bank of India) and in the PO cadre in “Bank of India”.

As I was having some personal issues at that time so I didn’t join the PO. Later on, I joined as a clerk in Andhra bank, and here begins my career in banking.

Being an engineer it wasn’t easy to continue with the clerk, though I did have satisfaction again there was something that was again missing.

This time I applied for the PO again and did fill-up the form But, I did not make the payment as something inside me was not content with applying for PO. So I didn’t proceed and instead, I choose to apply for SO IT Officer. I chose Adda247 for mock tests.

I cleared IBPS SO IT Officer prelims, mains and appeared for the interview and again waited for 1st April 2019 and this time I failed to get through it as I was having a score of 59.5 whereas the cut off was 60.

I was very much disheartened by this and I thought that I’ll never apply for this in the future. But, when the online application for this began, I couldn’t control my urge to apply for it again, so I applied IT, officer, once again this year (2019).

On 20th May 2020, when the result was declared for SO around 12.22 PM, I logged into the result page and my heart was beating slowly…

Don’t rest after you get your job, it’s the desire to learn and move forward that keeps me going, and probably that’s what differentiates an achiever from an aspirant. So friends, keep on going and don’t stop because you couldn’t at 1st on 2nd attempt, keep on trying, you’ll get it for sure.

Now, I see that I have cleared the exam and selected as an IT Officer in “Union Bank of India”. When I saw my results,

My mind automatically recalled (Sohan Lal Dwivedi)’s poem that is;

Preparation Strategy for any banking/insurance exam that I followed:-

For Prelims:- Go for online mock tests at least 10 numbers of them after you have cleared your basics and also go for some good sites such as “Adda247″.

For Mains:- Please increase your preparation time and go for mock tests but one thing I would highly recommend is Adda247’s Power capsule. The rest, Choice is yours.

Give a boost to your career in Banking, Prepare for JAIIB Exams-