We are providing you with the test of the day which will help you in upcoming exams like Syndicate Bank PO 2018. From this, you can practice questions with the timer that will help you to improve speed. Syndicate Bank PO is one of the biggest opportunity for you guys to grab on, set you own mark and proceed with full confidence. All the very best for your preparations and All the future exams.

Q1. India's first Garbage Festival was Organized in which of the following state?

Q2. 'Kyat' is the official currency of which Asian country?

Nepal
Myanmar
Bhutan
Sri Lanka
China
Solution:
The kyat is the currency of Burma (Myanmar). It is often abbreviated as "K" or "Ks" (plural). The current capital of Myanmar (Burma) is Naypyidaw.

Q3. In which city of Punjab is the Rail Coach Factory, the passenger coach manufacturing unit of Indian Railways, located?

Amritsar
Ludhiana
Jalandhar
Kapurthala
Patiala
Solution:
Kapurthala is a city in Punjab state of India. It is the administrative headquarters of Kapurthala District. Established in 1986, RCF is a coach manufacturing unit of Indian Railways. RCF has already carved a niche in the industrial scenario of the country at large and Indian Railways. Rail Coach Factory at Kapurthala in the Indian state of the Punjab is located on the Jalandhar-Firozpur line.

Q4. Who is the present governor of Andhra Pradesh?

Q5. What is the ranking of India among emerging economies on an Inclusive Development Index of World Economic Forum (WEF)?

53rd
57th
60th
59th
62nd
Solution:
India was ranked at the 62nd place among emerging economies on an Inclusive Development Index of World Economic Forum (WEF). In the report, China is on 26th position and Pakistan is on 47th.

Q7. In step IV, which of the following words would be at 3rd position to the left of 5th from the right end?

act
such
because
56
extreme
Solution:
56

Q8. How many step required completing the above arrangement?

Q9. Which of the following would be the step III after arrangement?

Q11. At present, Pia is 6 years older than Ray. The respective ratio between the present ages of Pia and Mini is 3 : 4. At present Ray is 14 years younger to Mini. What is Ray’s present age? 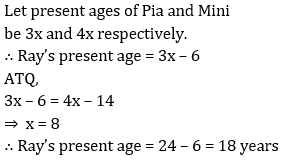 Q12. Samartha is five times as old as his daughter Trisha and Samartha’s wife Phalguni’s age is 26 years more than that of Trisha. The difference between thrice the age of Samarth ten years ago and twice the age of Phalguni ten years ago was 42 years. What will be the respective ratio of Phalguni’s age 12 years hence and Samartha’s age 2 years hence? 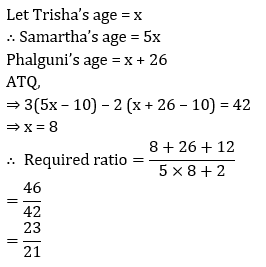 Q13. One litre of water is evaporated from 6 litres of a solution containing 5% salt. Find the percentage of salt in the remaining solutions?

Q14. Two men undertake to do a piece of work for Rs. 1400. The first man alone can do this work in 7 days while the second man alone do this work in 8 days. If they working together complete this work in 3 days with the help of a boy, how should the money be divided? 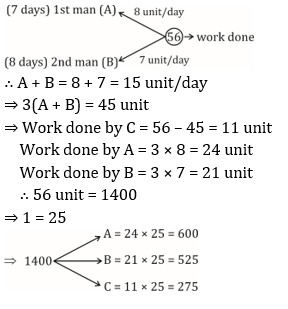 Q15. There are three containers A, B and C which contains water, milk and Acid respectively in equal quantities. 10% of the content of A is taken out and poured into B then, the same amount from B is transferred to C. What is the ratio of water in container A to the total quantity of mixture in container C? 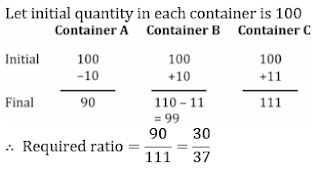 Directions (16-20): Rearrange the following six sentence (A), (B), (C), (D), (E) and (F) in the proper sequence to form a meaningful paragraph.
A. Its collapse in the aftermath of demonetisation had a devastating impact on refugees, especially women, who lost every avenue for their sustenance.
B. Ever since demonetisation was introduced, the government has been making a strong push for the adoption of digital payment systems.
C. However, refugees do not have a formal legal identity and are often wrongly perceived to be “illegal immigrants”.
D. This ambiguous status has forced them to the margins and has left them wholly dependent on the parallel economy for their survival.
E. With the government now trying to make Aadhaar the basis for achieving a unified financial infrastructure, those without access to banking systems or Aadhaar will soon find themselves excluded from the economy. One such group will be the refugees living in India.
F. Although India has not signed the Refugee Convention and does not have a domestic asylum law, it has a history of being a generous host to refugees.
Last: The lack of documentation to open bank accounts rendered them without the means to convert their cash into new currency, and virtually wiped out their entire savings. They struggled even to buy essential provisions or avail medical services.

Q16. Which of the following should be the THIRD sentence after rearrangement?

Q17. Which of the following should be the FIFTH sentence after rearrangement?

Q18. Which of the following should be the FIRST sentence after rearrangement?

C
B
E
A
D
Solution:
Option B is the first sentence of the paragraph as it clearly initiates the paragraph about effects of demonetisation over group of people and government's effort of achieving a unified financial infrastructure.

Q19. Which of the following should be the FOURTH sentence after rearrangement?

Q20. Which of the following should be the SECOND sentence after rearrangement?

E
A
B
F
D
Solution:
Statement A is the correct choice. Correct choice is BEFCDA. Statement E is the important connector with which discussion is taking transition in another direction.