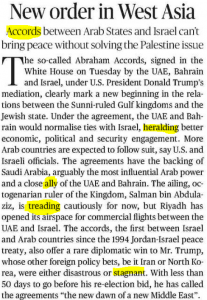 Accords (verb) समझौते
Meaning:- give or grant someone (power, status, or recognition).
Synonyms:- bestow, confer
Antonyms:- take, deny
Example:- Here she is, coming of her own accord; she must have guessed your thoughts.

Heralding (verb) की घोषणा
Meaning:- be a sign that (something) is about to happen.
Synonyms:- advertise, announce
Antonyms:- conceal, deny
Example:- She might have been a new Deborah, heralding her nation to battle.

Ally (noun) मित्र
Meaning:- a state formally cooperating with another for a military or other purpose.
Synonyms:- associate, colleague, friend
Antonyms:- antagonist, detractor
Example:- “You can well understand that I am no ally of Sagnier’s,” Mege resumed.

Treading (verb) चाल
Meaning:- walk in a specified way.
Synonyms:- squash, step on
Antonyms:- encourage, let go
Example:- “It was of that first treading that the Skin talked,” agreed the Coyote. 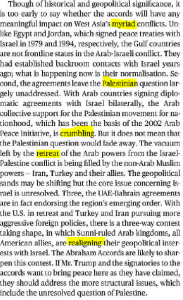 Palestinian (adjective) फिलिस्तीनी
Meaning:- a member of the native Arab population of the region of Palestine (including the modern state of Israel).

Crumbling (adjective) ढहती
Meaning:- breaking or falling apart into small fragments, especially as part of a process of deterioration.
Synonyms:- collapsing, decaying
Example:- Comfort was the apex of the pyramid which is now crumbling away.

Retreat (verb) पीछे हटना
Meaning:- (of an army) withdraw from enemy forces as a result of their superior power or after a defeat.
Synonyms:- abandon, back down
Antonyms:- advance, come
Example:- If we fail, there must be a retreat westwards at least seventy miles.