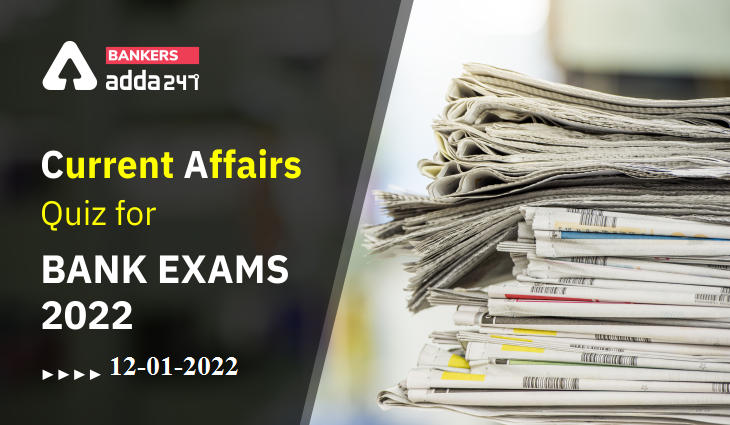 12th December Current Affairs 2022: Here, we are providing the 12th January Current Affairs Quiz. These types of topics are important for candidates who prepare for Bank Exam 2022. In this article, we are covering the following topics Headlines:

Q3. Which film has won the Golden Globe 2022 Best film in the Motion pictures (drama) category?
(a) The Power of the Dog
(b) King Richard
(c) West Side Story
(d) Being the Ricardos
(e) Belfast

Q5. What was the profession of Marilyn Bergman who has passed away recently?
(a) Lyricist
(b) Banker
(c) Jounalist
(d) Politician
(e) Economist

Q13. Which Indian Airport is one of the top 10 large international airports in the world that ensures ‘on-time’ departures?
(a) Chennai
(b) Delhi
(c) Mumbai
(d) Kolkata
(e) Surat

S3. Ans.(a)
Sol. The Power of the Dog film has won the Golden Globe 2022 Best film in the Motion pictures (drama) category.

S7. Ans.(c)
Sol. The Ministry of Railways has approved the renaming of the Kevadiya railway station in Narmada district of Gujarat, as Ekta Nagar railway station.

S10. Ans.(d)
Sol. Kerala Arts and Crafts Village Organization (KACV) from Kovalam was awarded with the ‘International Craft Award for 2021’ for the best craft village in the world by the World Crafts Council International.

S13. Ans.(a)
Sol. The Chennai International Airport is one of the top 10 large international airports in the world that ensures ‘on-time’ departures.

S15. Ans.(e)
Sol. This year National Human Trafficking Awareness Day is observed on January 11, 2022, which is on Tuesday. The day aims at raising awareness of the plight of human trafficking victims, and promoting and protecting their rights.