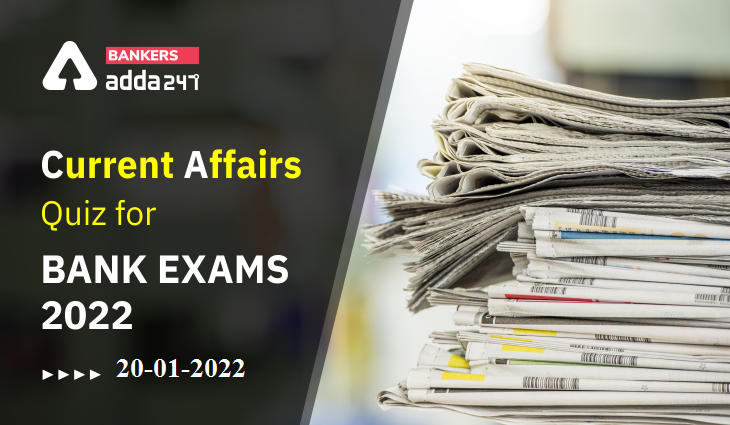 20th December Current Affairs 2022: Here, we are providing the 20th January Current Affairs Quiz. These types of topics are important for candidates who prepare for Bank Exam 2022. In this article, we are covering the following topics Headlines:

Q3. Which telecom enterprise in India has become the first in the industry to go live with UPI AUTOPAY?
(a) PhonePe
(b) Paytm
(c) Jio
(d) Freecharge
(e) Airtel

Q4. What was the profession of Narayan Debnath who has passed away recently?
(a) Comic artist
(b) Singer
(c) Politician
(d) Filmmaker
(e) Economist

Q6. ‘ClickPay’ is a facility launched by which company for its customers to pay recurring online bills easily and conveniently?
(a) Freecharge
(b) PhonePe
(c) MobiKwik
(d) Paytm
(e) GooglePay

S2. Ans.(b)
Sol. The National Disaster Response Force (NDRF) celebrates its Raising Day every year on January 19, since it came into existence on January 19, 2006. In 2022, the NDRF is observing its 17th Raising Day.

S6. Ans.(c)
Sol. MobiKwik has launched a new facility ‘ClickPay’ to enable its customers pay recurring online bills, such as mobile, gas, water, electricity, DTH, insurance, and loan EMIs, with ease by eliminating the need to remember individual bill details and due dates.

S7. Ans.(b)
Sol. The former Prime Minister of Japan, Toshiki Kaifu has passed away. He was 91.

S10. Ans.(a)
Sol. The Indian side was represented by Indian Naval Ships (INS) Shivalik and INS Kadmatt while JMSDF Ships Uraga and Hirado the participated from Japanese side.

S12. Ans.(b)
Sol. A new biography titled “Bose: The Untold Story of An Inconvenient Nationalist” authored by Chandrachur Ghose will be released in February 2022.

S15. Ans.(b)
Sol. Roberta Metsola, a Christian Democrat from Malta, was elected president of the European Union’s parliament. Her election comes a week after the shock death of outgoing parliament president David Sassoli, who was due to step down as part of a power-sharing pact.