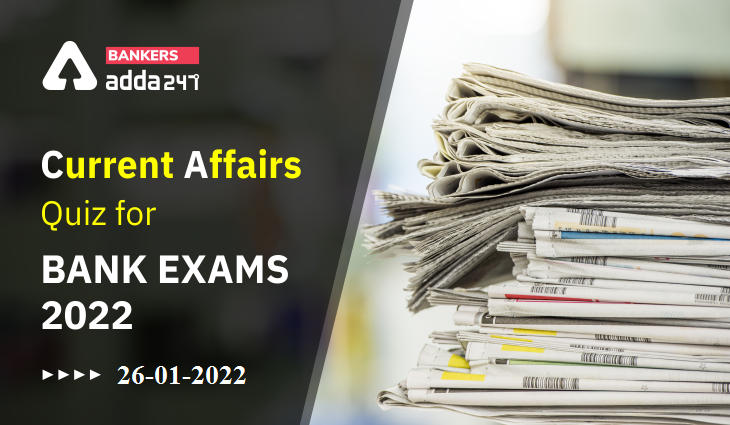 26th December Current Affairs 2022: Here, we are providing the 26th January Current Affairs Quiz. These types of topics are important for candidates who prepare for Bank Exam 2022. In this article, we are covering the following topics Headlines:

Q5. Who has been appointed as the Chairperson of the Prevention of Money Laundering Act (PMLA) Adjudicating Authority?
(a) Preeti Singh
(b) Sunil Gaur
(c) Amit Sahni
(d) Vinodanand Jha
(e) Rashmi Singhal

Q8. Ramachandran Nagaswamy, who has passed away recently was one of the renowned __________ of Tamil Nadu.
(a) Filmmaker
(b) Author
(c) Archaeologist
(d) Mountaineer
(e) Ecologist

Q11. Which of the following has developed an indigenous RT-PCR diagnostic kit, ‘Om’, for the testing of Omicron variant of coronavirus?
(a) DRDO
(b) CSIR – CDRI
(c) IIT Madras
(d) AIIMS
(e) ICMR

Q13. Name the player who has been conferred with the Sir Garfield Sobers Trophy for ICC Men’s Cricketer of the Year 2021.
(a) Shaheen Afridi
(b) Mohammad Rizwan
(c) Joe Root
(d) Babar Azam
(e) Janneman Malan

S1. Ans.(c)
Sol. The Pradhan Mantri Rashtriya Bal Puraskar (PMRBP) for the year 2022 has been conferred to 29 children.

S3. Ans.(b)
Sol. One97 Communications (which owns Paytm) and Fullerton India, have partnered to provide lending products to merchant partners and consumers.

S4. Ans.(b)
Sol. In India, the National Tourism Day is celebrated every year on 25th January to promote tourism and raise awareness about the importance of tourism for the country’s economy.

S5. Ans.(d)
Sol. Vinodanand Jha has been appointed as the Chairperson of the Prevention of Money Laundering Act (PMLA) Adjudicating Authority, for a period of 5 years.

S6. Ans.(b)
Sol. Swiggy (Food-ordering and instant grocery delivery platform) has signed a $700 million funding round led by asset manager Invesco. With this, the total valuation of Swiggy has reached to $10.7 billion i.e. it is now a decacorn.

S8. Ans.(c)
Sol. Noted Indian historian, archaeologist and epigraphist from Tamil Nadu, Ramachandran Nagaswamy, has passed away. He was 91.

S10. Ans.(c)
Sol. Governments of Himachal Pradesh and Haryana signed an MoU at Panchkula, for the construction of Adi Badri Dam that would come up on 77 acres in Himachal Pradesh near Adi Badri area of Yamuna Nagar district of Haryana.