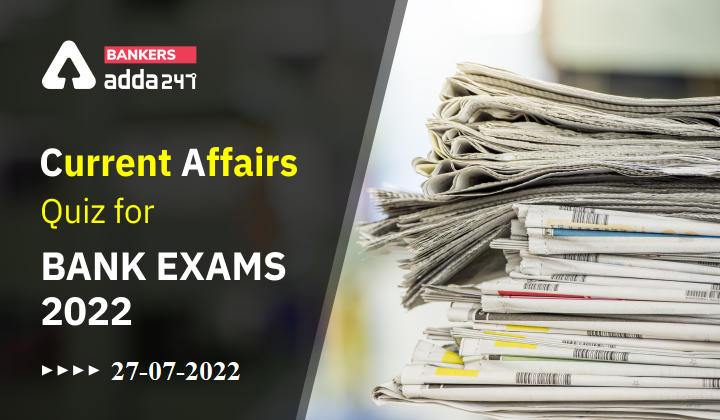 Q3. A Maritime Partnership Exercise (MPX) was conducted between ________ Maritime Self Defense Force and Indian Navy in July 2022 in the Andaman Sea.
(a) Maldives
(b) Russia
(c) Japan
(d) USA
(e) China

Q13. Grand statue of Chandrashekhar Azad to be installed in which city of India.
(a) Dehradun
(b) Surat
(c) Mumbai
(d) Bhopal
(e) Pune

S2. Ans.(b)
Sol. The second edition of Jammu film festival will be held here from September 3 with films from 54 countries slated to be screened over two days of the event.

S3. Ans.(c)
Sol. A Maritime Partnership Exercise (MPX) was conducted between Japan’s Maritime Self-Defense Force and the Indian Navy in the Andaman Sea.

S4. Ans.(d)
Sol. Kargil Vijay Diwas is the celebration of India’s historic win over Pakistan on July 26, 1999. The Indian Army successfully removed Pakistani forces who were illegally occupying a hilltop at the Indian side of the Line of Control (LoC) at Kargil, Ladakh.

S6. Ans.(e)
Sol. Burhanpur also known as the ‘Darwaza of Dakhin’ in Madhya Pradesh has becomes the first ‘Har Ghar Jal’ certified district in the India.

S7. Ans.(a)
Sol. Canara Bank has launched “Canara ai1”, its mobile banking app. The banking app would be a one-stop solution with more than 250 features to cater to the banking needs of its customers.

S13. Ans.(d)
Sol. A grand statue of Amar Shaheed Chandrashekhar Azad will be installed in Bhopal.

S15. Ans.(b)
Sol. The United Nations Relief and Works Agency for Palestine Refugees in the Near East (UNRWA) has expressed “deep appreciation” for India’s contribution of USD 2.5 million that will go directly to serve the schools, health centres and other basic services run by the organisation to support Palestinian refugees.