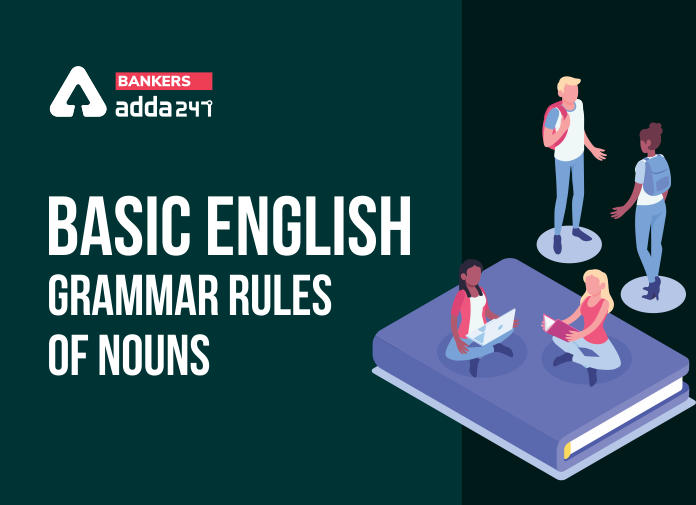 Types of Nouns: If you are a banking aspirant then you must be knowing the importance of the English Language as it carries a lot of weightage in Prelims and mains examination. There are a lot of upcoming banking examinations for which aspirants are preparing day and night. Candidates must prepare for the English language section as it will help them increase their overall marks in the examination. You can easily clear this section if you have a strong hand in the basics of English Grammar. Considering the importance of grammar we will be covering nouns in this article, Make sure to read this article properly and fully understand the rules related to it.

Common nouns refer to people, places, and things in general like chairs or dogs.

Concrete nouns refer to physical things that you can touch. For ex- Man, Rice, etc.

Abstract nouns refer to the opposite of concrete nouns. They are things that you cannot touch. Abstract nouns are ideas, concepts, and feelings of a person.

A collective noun refers to a group of individuals. For ex- Her family lives in different countries.

A compound noun refers to a noun that is made with two or more words. Most compound nouns are [noun + noun] or [adjective + noun]. For ex- cat food, blackboard, breakfast, full moon, etc.

2. some nouns are singular in meaning, but they are used as plural nouns and always tend to take a plural verb.

(A) The cattle are grazing in the ground.

(B)  Police have controlled the situation.

(A) Where are my trousers? ( Incorrect)

(A) Where are my trousers? ( correct)

4. some nouns indicate length, measure, money, weight, or number but when they are preceded by a numeral, they remain unchanged in form.

(A) It is a four–year degree course. (correct use)

5. There are some collective nouns such as jury, public, team, committee, government, audience, orchestra, company, etc. are used both as singular and Plural.

(A) The jury was divided in their opinion.

6. There are Some nouns which have one meaning in the singular and another in the plural:

So make sure you use them correctly to avoid any mistakes.

7.  There are certain nouns in which people are often confused or commit mistakes.

8. Another important rule is a pronoun must agree with its antecedent in person, number and gender.

For Ex- Every kid must bring his luggage.

All kids must do their homework.

9. While you are using ‘everybody’ ‘everyone’, ‘anybody’, and ‘each’ the pronoun of the masculine or the feminine gender is used according to the context.

I shall be happy to help each of the girls in this practice.

The point to be noticed here is, when the sex is not mentioned, we use the pronoun of the masculine gender.

11. Words like Enjoy, apply, resign, acquit, drive, exert, avail, pride, absent, etc., when used as transitive verbs, always take a reflexive pronoun after them. When ‘self’ is added to ‘my’, ‘your’, ‘him’, ‘her’, and ‘it’, and ‘selves’ to our and them – they are known as reflexive pronouns.

12. Words like ‘Who’ denote the subject and ‘whom’ is used for the object?

Who: It’s the subject of a verb—e.g., Who gave you that bag?

It’s a predicate nominative which means that a noun in the predicate that renames or refers to the sentence’s subject)—e.g., This is who I am.

Whom is an objective pronoun, which is a pronoun that receives the action of a verb. It also has two main uses:

It is the object of a verb—e.g., Whom should I call?

It is the object of a preposition—e.g., From whom did you get this information?

13. If two or more singular nouns are connected by ‘either or’; ‘neither nor’, ; and ‘or’, the pronoun used is singular.

14. When a singular and a plural noun are joined by ‘or’, ‘nor’, the pronoun must be plural.

15. Words like  ‘Whose’ is used for living persons and ‘which’ for lifeless objects.

17. When a pronoun refer to a collective noun, it must be in the singular number and in the neuter gender if the collective noun is viewed as a whole but  if it gives an idea of different entities , plural pronoun is used.

If the collective noun conveys the idea of separate individuals comprising the whole, the pronoun standing for it must be plural.

The jury were divided in their opinions.

in this sentence ,  the ‘jury’ gives the idea of several individuals.

18. If pronouns of different persons are to be used together in a sentence, the serial order of persons should be as follows;

For Ex- You, he and I have finished the work. (General idea)

I, you and he are to appreciated. ( here Confession of appreciation is expressed, it’s a Positive  idea, hence order is 123)

19. Word-like ‘Some’ is used in affirmative sentences to express quantity or degree. ‘Any’ is uses in negative or interrogative sentences.

But ‘some’ may be correctly used in interrogative sentences which are, in fact, requests.

‘Few’ means ‘not many’, or we can say ‘almost nothing’.  A ‘few’ signifies positive and means ‘some at least’. ‘The few’ on the other hand means ‘whatever there is’.

22. Use of words like  little, a little, the little

‘The little refers to  ‘not much but all there is’.

‘Elder’ is used to refer the age difference for persons of same family. While ‘Older’ refers to the  persons as well as things and is followed by ‘than’.

24.We Normally use ‘than’  in the comparative degree, but with words like superior, inferior, senior, junior, prior, anterior, posterior and prefer ‘to’ is used.

25. When we do  a comparison by using a comparative followed by ‘than’, the word ‘other’ must  exclude the thing compared form the class of things with which it is compared.

‘Any woman’ includes the woman herself and thus the sentences will be awkward.

26. When ‘many a’ is used it is always followed by the singular verb.

27. When the words like ‘as well as’, ‘along with’, together with’, ‘no less than’, ‘in addition to’ and ‘not’ and ‘with’ join two subjects, the verb will be used according to the first subject.

We hope that you have understood all the rules and regulations properly. The only way to learn them is to practice questions related to them. Simply cramming them will not be helpful and will not serve your purpose. You will easily forget it. So make sure you practice them as much as you can.

Ans. A noun is the name of a Place, Thing, Person, etc.

Q. What are the different types of nouns?