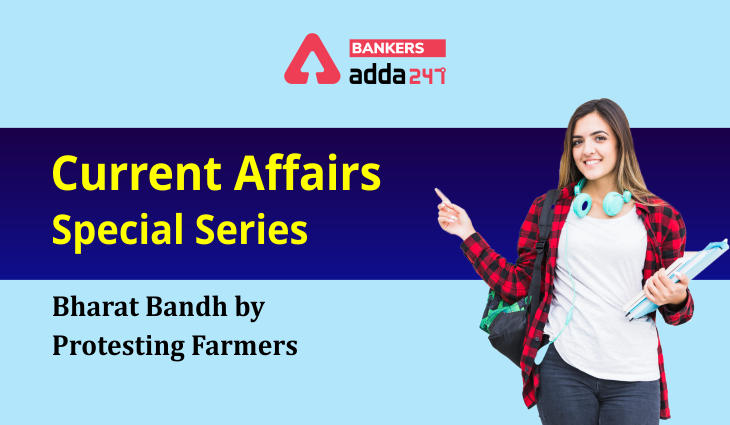 Bharat Bandh called by protesting farmer unions against their agitation to the Centre’s three farm laws which have impacted normal life across India. The farmers who are protesting are attempting to organize a ‘Rasta Roko’ on major national and state highways during the whole day bandh has caused a disruption in vehicular movement in parts of the country.

Some rails services have also been called off as farmers blocked railway tracks in part of Punjab and Haryana. In most of the parts of the country, all businesses and establishments functioned normally and transport services were available for the public. The umbrella body of over 40 farm unions, Samyukta Kisan Morcha is leading the farmer’s agitation to the people to join the bandh.  The protest of bandh will be held during the time period from 6 am to 4 pm for all government and private offices, educational and other institutions, shops, industries, and commercial establishments will be closed.

Punjab: As farmers jammed highways and other roads at many places in Punjab where the ruling Congress is backing the Bharat Bandh against the Centre’s three agri laws. A large number of farmers and supporters obstructed railway tracks at Devidaspura village in Amritsar to support Bharat Bandh.

Delhi: Borders around the national capital have ceased by Delhi police in view of the Bharat Bandh. Many passengers Delhi-Jaipur Expressway had to face difficulties and huge traffic congestion. Delhi metro station which is the main source of transportation for many locals was closed in view of security reasons.

Haryana: The protesters in Haryana have blocked some highways including in Sirsa, Fatehabad, and Kurukshetra. Farmers have also sat on rail tracks to show their agitation against farm bills.

Kerala: The southern state is showing a near-total lockdown as both the ruling left and the opposition Congress came out together to support the agitating farmers. Many trade unions in Kerala are supporting the Bharat Bandh today (27-September-2021).

Karnataka: A protest march has been planned from K R Puram to Townhall through many parts of Bengaluru city by Farmer’s organizations. Metro services have been closed for operating today.

Odisha: OSRTC (Odisha state Road Transport Corporation) will remain frozen from 6 am to 3 pm on Monday in view of a nationwide strike called by farmer organizations against the Centre’s three Contentious new agriculture laws.