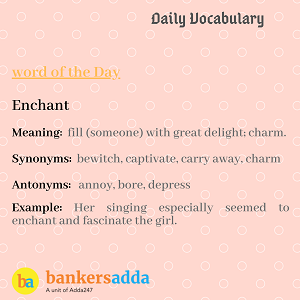 Exotic (adjective) : विदेशी
Meaning: originating in or characteristic of a distant foreign country.
Synonym: foreign, non-native
Antonym: native, familiar
Example : It gave me the notion of an exotic Immensity ruled by an august Benevolence.

Hapless (Adjective) : अभागी
Meaning: (especially of a person) unfortunate.
Synonyms: unfortunate, unlucky
Antonyms: fortunate, lucky
Example: When Jason lost his wife and job on the same day, he knew he was a hapless soul.

Scoff (Verb) : व्यंग्य
Meaning: speak to someone or about something in a scornfully derisive or mocking way.
Synonyms: mock, deride, ridicule
Antonyms: flatter, praise, compliment
Example: The rude little rich girl thought it was fun to scoff at the poor children at her school.