Add new word in your dictionary, learning new words daily improve your vocabulary and speaking skills, you can use these words on your daily language efficiently. SBI Clerk, LIC Assistant Mains, IBPS RRB, IBPS PO, IBPS Clerk are some of the upcoming examinations which can be prepared with the help of these words. A good vocabulary is an indispensable (very important or necessary) tool. Adda247 brings to you a great way to learn new words daily. Here is the vocabulary for 16th January. 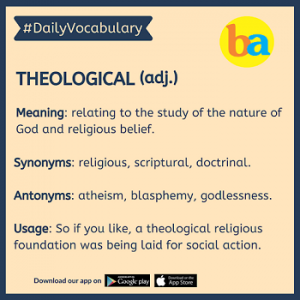 Word: Theological (adjective) : आध्यात्मविद्या सम्बन्धी
Meaning: relating to the study of the nature of God and religious belief
Synonyms: religious, scriptural, doctrinal
Antonyms: atheism, blasphemy, godlessness
Usage in a sentence: So if you like, a theological religious foundation was being laid for social action

Word: Clinch (Verb, Noun) : पकड़
Meaning: confirm or settle (a contract or bargain).
Synonyms: grip, clasp, settle
Antonyms: unlock, release
Usage in a sentence: They are hoping to clinch a major deal to supply computers to the army.

Word: Veteran (Noun) : दीर्घानुभवी
Meaning: a person who has had long experience in a particular field.
Synonyms: experienced, seasoned, expert, skilled
Antonyms: inexperienced, rookie, amateur, unskilled
Usage in a sentence: He is a veteran parliamentarian whose views enjoy widespread respect.

Word: Linger : दीर्घ काल तक रहना
Meaning: stay in a place longer than necessary because of a reluctance to leave.
Synonyms: loiter, stay, remain, wait
Antonyms: rush, hurry, leave
Usage in a sentence: There’s no need to linger over this stage of the interview.

Word: De facto (Adverb , Adjective) : वास्तव में
Meaning: in fact, whether by right or not. (Adverb)
Synonyms: actually, in fact, in reality, in effect
Antonyms: de jure, non-realistic, allegedly, hypothetically
Usage in a Sentence: With the death of his father, he became the de facto head of the family.

Word: Ambivalent (Adjective ) : द्वैधवृत्तिक
Meaning: having mixed feelings or contradictory ideas about something or someone.
Synonyms: uncertain, undecided, unsure, unsettled
Antonyms: certain, sure, conclusive, decided
Usage in a sentence: The Australian private sector is increasingly bullish about the technology’s future, despite its government’s generally ambivalent attitude toward climate change.

Word: Landslide : भूस्खलन
Meaning: a collapse of a mass of earth or rock from a mountain or cliff.
Synonyms: avalanche, advantage, conquest, victory
Antonyms: failure, disadvantage, defeat
Usage in a sentence: The presidential election turned out to be one of the biggest landslides in history.

Word: Poised (Verb, Adjective) : संतुलित रखना
Meaning: be or cause to be balanced or suspended.
Synonyms: confident, balanced, tranquil
Antonyms: unbalanced, insecure, discomposed
Usage in a sentence: He walked along with a water jug poised on his head.