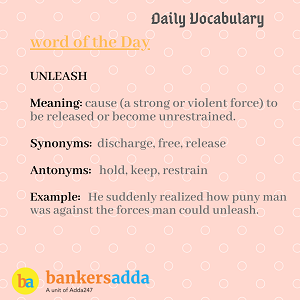 UNLEASH (verb) : खोलना
Meaning : cause (a strong or violent force) to be released or become unrestrained.
Synonyms: discharge, free, release
Antonyms: hold, keep, restrain
Example: He suddenly realized how puny man was against the forces man could unleash.

PHISHING (noun) : फ़िशिंग
Meaning : The fraudulent practice of sending emails purporting to be from reputable companies in order to induce individuals to reveal personal information
Synonyms: spoofing
Antonyms : debunking, exposing
Example : phishing is often used to gain a foothold in corporate or governmental networks as a part of a larger attack.

RELENT (verb) : नरम पड़ना
Meaning: to cease resistance (as to another’s arguments, demands, or control).
Synonyms: concede, give in, submit, succumb.
Antonyms: combat, confront, counter, defy.
Example: Because my mother is very angry, she won’t relent on my severe punishment.

BAGATELLE (Noun) : छोटी बात
Meaning: A thing of little importance
Synonyms: Frippery, Nothing
Antonyms: Succeed, Importance
Example : I would like to point out that that sum is a mere bagatelle of the whole revenue.

ARDOR (Noun) : ललक
Meaning: Enthusiasm or passion
Synonyms: Emotion, warmth
Antonyms: apathy, indifference
Example : He had been a painter throughout his life, but he never had a vision of painting with such ardor and desire.