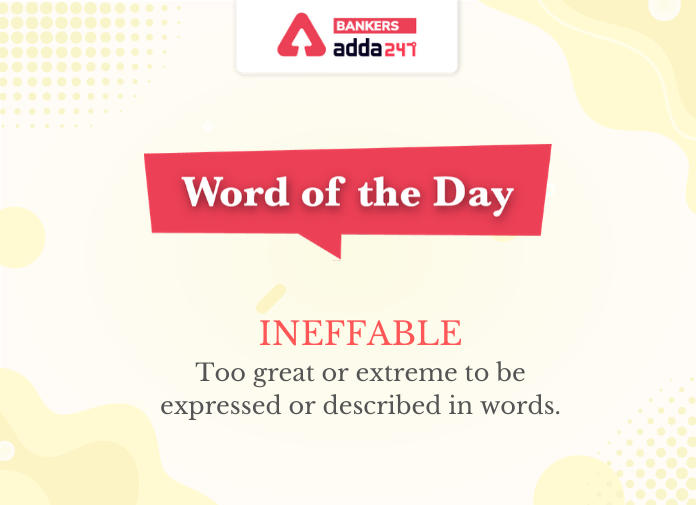 INEFFABLE(adjective)प्रशंसातीत
Meaning: too great or extreme to be expressed or described in words.
Synonyms: inexpressible, indescribable, marvelous, wonderful
Antonyms: definable, describable, utterable
Example: There was a spring in his step, and ineffable calmness dressing his sun-brown face.

REPRISAL(Noun) : प्रतिहिंसा
Meaning: an act of retaliation.
Synonym: retaliation, counterattack
Antonym: pardon, remission
Usage: He felt secure enough in his information that he announced his opinion on the matter without fear of reprisal.

CULMINATION (noun) : परिणति
Meaning: the highest or climactic point of something, especially as attained after a long time.
Synonym: climax, pinnacle, peak.
Antonym: nadir, base, bottom.
Usage: Their arrest was the culmination of an operation in which 120 other people were detained.

ABDICATE (Verb) : सत्ता त्यागना
Meaning: (of a monarch) renounce one’s throne.
Synonyms: resign, retire
Antonyms: keep, come, continue
Usage: Because the mother chose to abdicate her role as a parent, her children have become the terrors of the neighborhood

HIATUS (Noun): एक ठहराव
Meaning: a pause or break in continuity in a sequence or activity.
Synonyms: pause, break, interval, interruption, suspension
Antonyms: closure, juncture, misfortune
Example: The professor will take his family on a long vacation during his hiatus.

REMINISCE (Verb) : याद ताजा करना
Meaning: indulge in enjoyable recollection of past events.
Synonyms: recall, remind
Antonyms: disregard, ignore
Example: As soon as the veterans get together, they reminisce about their service days.

DETERRENT(noun) : हतोत्साह करनेवाला
Meaning: a thing that discourages or is intended to discourage someone from doing something.
Synonyms: disincentive, discouragement
Antonyms: incentive, encouragement
Example: The nuclear deterrent has maintained an uneasy peace.