Theory of Demand- Economics is a subject that you have study for both the recruitment exams, SEBI Officer Grade A and UPSC EPFO Enforcement Officer recruitment exam. The NCERT is the benchmark when it comes to prepare the basics of Economics for competitive exLearn about the Demand Theory of Economics for UPSC EPFO Enforcement Officer and SEBI Grade A Officer Exams 2020.ams and here we have brought to you notes from Demand Theory of NCERT. You can also watch a YouTube Expert on Demand Theory given below for better understanding.

Demand means effective desire or want for a commodity, which is backed by the ability and willingness to pay for it.

Examples: Food items and clothes, are examples of goods, & Tasks that doctors and teachers perform for us as examples of services.

The relation between the consumer’s optimal choice of the quantity of a good and its price is very important and this relation is called the demand function.

Thus, the consumer’s demand function for a good gives the amount of the good that the consumer chooses at different levels of its price when the other things remain unchanged.

It is Represented as q = d(p) where q denotes the quantity and p denotes the price of the good. 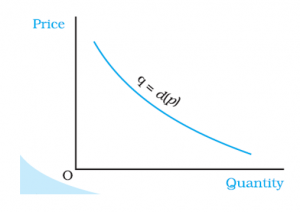 Given the price of other goods, the consumer’s income and her tastes and preferences, the demand of a good is inversely related to the price of the good. Hence, the demand curve for a good is, in general, downward sloping. (Refer to the image above)

The inverse relationship between the consumer’s demand for a good and the price of the good is called the Law of Demand.

Exception to Law of Demand

What are Normal & Inferior Goods?

What are Substitute Goods & Complementary Goods?

Preparing for UPSC EPFO 2020? Fill the form to get all Study Material

Shifts in the Demand Curve?

1. Changes in the Income of the consumer.

2. Change in the tastes and preferences

3. Price of substitutes has risen.

4. Price of complementary goods has declined.

Movements along the Demand Curve

Thus, any change in the price leads to movements along the demand curve. 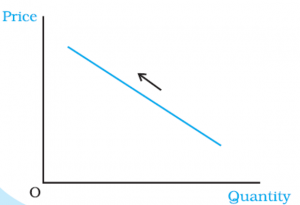 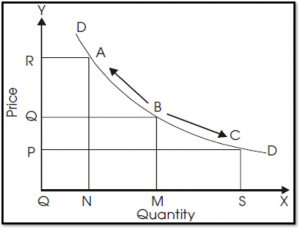 In case of any doubts, do mail us at blogger@adda247.com