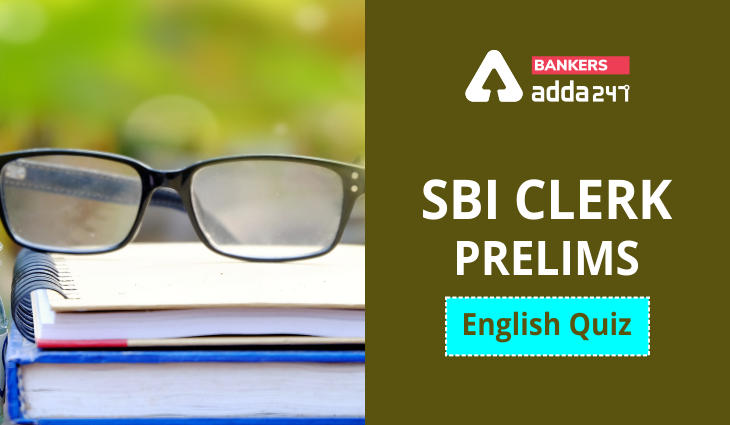 Q2. If India is to ever close the immense gap between tourism potential and performance, (A)/it is vital that politicians and policymakers in state governments focus on creating (BB)/ high-quality experiences, rather than merely collect entrance (C)/ fees at monuments built by their olden-day predecessors. (D)/
(a) A
(b) B
(c) C
(d) D
(e) No Error

Directions (6-10): In each of the following sentences, there is a blank space. Below each sentence, there are five options with one word each. Fill up the blank with the word that makes the sentence grammatically and contextually correct.

Q7. Because of the obnoxious behaviour of the defendant, the judge instructed the jury not to allow their personal feelings ………………. their objectivity in the case.
(a) honours
(b) violation
(c) deterioration
(d) vitiate
(e) Both (a) and (d)

Directions (11-15): In each of the following questions, a word has been used in sentences in different ways. Choose the option corresponding to the sentence in which the usage of the word is INCORRECT or INAPPROPRIATE.

Q11. EMINENT
(a) Everyone was looking forward to taking the class with such an eminent professor.
(b) Despite the fact that Robin is an eminent expert of art, she would rather let her husband choose the pieces they display in their home.
(c) The firemen told us it was safe to leave the building slowly because we were not in eminent danger.
(d) Both (a) and (b)
(e) All (a), (b) and (c)

Q12. IMMINENT
(a) When the Secret Service arrived, everyone knew the president’s arrival was imminent.
(b) The hurricane is imminent and has homeowners rushing to board up their windows.
(c) Because Dr. Thicke is one of the most imminent physicians in town, it’s impossible to get an appointment with him unless you have a referral.
(d) Both (a) and (b)
(e) All (a), (b) and (c)

Q13. ADAPT
(a) After Lou lost one arm in a car accident, he had to adapt to a prosthetic limb.
(b) The salesman was adapt at charming customers into spending more than they had planned.
(c) Kelly found it difficult to adapt to being a paparazzi target after going unnoticed for so many years.
(d) Both (a) and (b)
(e) Both (a) and (c)

Q14. ADEPT
(a) When James relocates to a different side of the country, he will have to adept to a new weather pattern.
(b) Because the rain came out of nowhere, we had to adept our outdoor party to an indoor event.
(c) Although Stephanie seems to have a hard time in science, she is adept at solving math equations.
(d) Both (a) and (b)
(e) All (a), (b) and (c)

Q15. PRESERVE
(a) The automobile cover will preserve the car’s windows during the hailstorm.
(b) Because I want to preserve my pictures, I keep them in a storage album.
(c) Although the president did everything he could to preserve the country as a whole, civil war was inevitable.
(d) All are correct
(e) None is correct

S1. Ans.(d)
Sol. Error is in part D. Use ‘morality’ in place of ‘moral’ because a noun is required here.

S2. Ans.(c)
Sol. Error is in part C. Use “collecting” in place of “collect” as per parallelism.

S7. Ans.(d)
Sol. Vitiate: spoil or impair the quality or efficiency of.

S8. Ans.(e)
Sol. Both (a) and (b). “Vie” means compete eagerly with someone in order to do or achieve something.

S11. Ans.(c)
Sol. Eminent: (of a person) famous and respected within a particular sphere.

S14. Ans.(d)
Sol. Adept: very skilled or proficient at something.

S15. Ans.(d)
Sol. Preserve: maintain (something) in its original or existing state.