IBPS PO Prelims is in its way and lot of aspirants are heading towards new hopes with this upcoming opportunity. Thus, English Language can be an impetus for their success by saving time and scoring well. So, instead of boiling the ocean, try building up a strong vocabulary, an effective knowledge of grammar, and efficient comprehension skills so as to be on the ball to face this particular section. Here is a quiz on English Language being provided by Adda247 to let you practice the best of latest pattern English Questions for upcoming IBPS PO exam.

(Directions 1-5) In each of the Question below, a sentence is given with four words given in Bold in the sentence. Among these bold words, one may be wrongly spelled. The option of that word is the answer. If all four words are correctly spelled mark (e). i.e. ‘All Correct’ as the answer.

Q1. Sociologists have often comented that outsiders have a more clear-sighted view of everydayness than us.
(a) Sociologists
(b) Comented
(c) Outsiders
(d) Everydayness
(e) All are Correct.

Q2. As a significant majority among the refugges belonged to western Punjab, the cultural transformation of Delhi was influenced deeply by Punjabi culture.
(a) Significant
(b) Refugges
(c) Cultural
(d) Influenced
(e) All are Correct.

Q3. The court must resist being the avenger for society in favor of nurturing a culture where justise and retribution are not the same.
(a) Resist
(b) Society
(c) Justise
(d) Retribution
(e) All are Correct.

Q4. I was certain that he would be bitten too, but the moment Rico stood at the door of the cage the wolf-like dog suddenlly had the aspect of a lamb.
(a) Bitten
(b) Moment
(c) Suddenlly
(d) Aspect
(e) All are Correct.

Q5. By fasting safely, you can definitely open up your body’s restorative and healing powers, create clearity in your thoughts and emotions, and reboot your body functioning
(a) definitely
(b) restorative
(c) reboot
(d) clearity
(e) All are Correct.

Directions (6-10): In each of the questions given below, there are five sentences out of which one doesn’t match the context to which the other four are related. Find out that odd one out sentence and mark it as your answer.

Q6. (A) If doable treks is part of your fitness journey, there’s one around Bengaluru that should be on every beginner’s list.
(B) The drive to Madhugiri takes about two hours from Bengaluru, while the nearest railway station is Tumkur.
(C) Famous for its fort, the ruins of which lie atop the steep hill at a height of 3,950 feet, it is quite an adventurous task to climb it.
(D) Madhugiri, Asia’s second-largest monolithic rock is about 110 kilometers away from Bengaluru towards Tumkur district.
(E) There was no point looking up or down — one needed to just keep going.
(a) A
(b) B
(c) C
(d) D
(e) E

Q7.  (A) Insects lend themselves to all kinds of textures.
(B) They eat tarantulas in Cambodia, the Mopane worm has an annual trade value of over $85 million in southern Africa, and flying termites are treasured.
(C) By 2050, the planet won’t be able to feed the nine billion mouths it will house.
(D) And they are the biggest species group in the world, outnumbering humans 200 million to one.
(E) Around 1,900 insect species are already being eaten by two billion people in the world.
(a) A
(b) B
(c) C
(d) D
(e) E

Q8. (A) The NAP report acknowledges that disciplinary specialization has resulted in many developments but also points out that emerging problems are multi-disciplinary.
(B) This can be seen in two examples: rising demand for energy, and continuing advances in technology.
(C) The use of energy on a large scale and the continued availability of energy in an environmental-friendly manner are challenges which cannot be addressed by narrow specialists.
(D) We would nudge them all at least to their historical norms due to the wildcard from structurally less-liquid markets.
(E) Problems in a real-life setting are interdisciplinary and require an appreciation of related fields.
(a) A
(b) B
(c) C
(d) D
(e) E

Q9. (A) The bonnetheads, one of the smallest member of the hammerhead family, are abundant in the shallow waters of the Americas, where they usually feed on crab, shrimp, snails, and bony fish.
(B) In the study, five bonnethead sharks were fed on a three-week diet of seagrass and squid.
(C) Scientists have identified the world’s first known omnivorous shark species, which consumes up to 60 percent of seagrass.
(D) A series of tests indicated that the fish successfully digested the seagrass with enzymes that broke down components of the plants, such as starch and cellulose
(E) Experts from the University of California-Irvine and Florida International University in Miami decided to investigate the bonnethead sharks’ dietary habits after reading reports of them munching on seagrass, reports Xinhua news agency.
(a) A
(b) B
(c) C
(d) D
(e) None of the Above

Q10. (A) Those some are people with strong head and adventure souls because the roads leading to this gorgeous valley are absolutely a no-no for the faint-hearted!
(B) Less populated, Pangi Valley is truly a hidden gem in Himachal, still safe from the eyes of hungry tourists.
(C) Only travelers in search of peace, nature, and adventure make it through with strong determination and the views that greet the eyes are totally worth every pain.
(D) Pangi Valley in Himachal Pradesh, for some, is a road to heaven.
(E) When he returned, he forewarned everyone to avoid bothering the God resting high up in the peak.
(a) A
(b) B
(c) C
(d) D
(e) E


S6. Ans. (e)
Sol. Sentences A, D, C and B make a meaningful paragraph but statement E does not match the context and is the odd one out.


S7. Ans. (c)
Sol. Sentences A, D, E and B when reading in the same order form a meaningful paragraph and sentence C does not match the context of the paragraph. Hence, sentence C is the odd one out.

S8. Ans. (d)
Sol. Sentence E, A, B, and C make a meaningful paragraph. Sentence D is about markets which do not relate to the context of other sentences. Hence, sentence D is the odd one out.

S9. Ans. (e)
Sol. The sentences CEABD make a meaningful paragraph and all are related to the same context. Hence, None of the Above is an odd one out.

S10. Ans (e)
Sol. The sentences D, A, B, and C form a meaningful paragraph and sentence E is a misfit here. Hence E is the odd one out.


S11. Ans. (d)
Sol. Feasible: possible and practical to do easily or conveniently.
Conceivable: capable of being imagined or grasped mentally.

S12. Ans. (b)
Sol. Hapless: (especially of a person) unfortunate.
Doomed: likely to have an unfortunate and inescapable outcome; ill-fated.


S13. Ans. (a)
Sol. Defile: damage the purity or appearance of; mar or spoil.
Debase: reduce (something) in quality or value; degrade.

S15. Ans. (a)
Sol. Charlatan: a person falsely claiming to have a special knowledge or skill.

Maestro: a distinguished figure in any sphere. 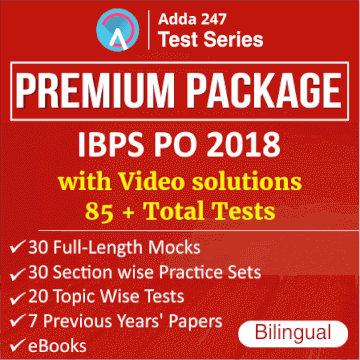