As the date of IBPS SO Exam is coming nearer, hopes of aspirants are growing with every passing day. It’s time to test their hard work and they would want to make the best of this opportunity. Thus, English Language can play a vital role to get success. IBPS SO  English is all about well-planned strategy, time- management and strong grasp over English Language. So, stop boiling the ocean, and acquire command over vocabulary, enhance deep knowledge of grammar, and build competent comprehension skills to get the ball in the court in first attempt. Here is a quiz on English Language provided by Adda 247. It will help you practice latest pattern of English Questions for upcoming IBPS SO Pre Examination 2019.

Directions (1-8): In each of the following questions, a sentence is given with a blank. There are five idioms given below each sentence, one out of which can be used in the blank to form a meaningful sentence. Choose the most appropriate idiom among the five options that makes the sentence contextually meaningful.

Q9.
(a) The compilation of the NPR is a preliminary step towards preparing the NRC.
(b) The Appellate Body was set up in 1995 as a “safety valve” against erroneous panel reports.
(c) India should enact a refugee law wherein the right to live a life without fear or confined can be protection.
(d) No good will come out of setting off a clamour for inclusion and panic over possible exclusion.
(e) All are correct

Q10.
(a) It is imperative that the communal agenda of the BJP and the Central Government is foiled.
(b) A 2004 amendment to the citizenship law introduced a clause that ‘illegal migrants’ will not be eligible to apply for citizenship.
(c) Alitco’s bad loans spiked to 23.8% of its loan book in the July-September quarter, adding to concerns of recovery for the lenders.
(d) China said it would cutting tariffs on products including frozen pork, avocado and some types of semiconductors next year.
(e) All are correct

Q11.
(a) Suddenly there were six helicopters and five Gulfstream jets flied into the city.
(b) The market rate for real estate in the city went up to ₹2,500-3,000 per sq. ft.
(c) Once Mallikarjuna Reddy and friends tasted success with their struggle, they put forward an alternate development plan for the city.
(d) Talking of deplorable health and hygiene issues in the city, local journalists have a delightful anecdote.
(e) All are correct

Q12.
(a) The Board of Directors decided that a change in leadership was necessary to restore confidence in the Company
(b) Jharkhand Assembly election results will be declared today as counting votes began from 8 am.
(c) The BJP had won in 37 seats while AJSU was victorious in five of them.
(d) AIMIM failed to win any of the eight seats it had contested in the just-concluded Jharkhand state elections.
(e) All are correct

Q13.
(a) The creditors’ committee had sought extension of corporate insolvency resolution process of the debt laden airline
(b) All non-BJP parties must raise their sights and rally around the Congress to save Constitution of India.
(c) Peer-to-Peer lending mandates that all the transactions through bank accounts and cash transaction are strictly prohibited.
(d) The Japanese technology conglomerate is now likely to enter the New Year without the WeWork financing
(e) All are correct

Q14.
(a) RBI recently announced that the NEFT has become a 24×7 facility that will be available round the year, including bank holidays.
(b) Tehran and Delhi have agreed to accelerate the development of Chabahar Port
(c) Reliance Jio on Monday announced the ‘2020 Happy New Year Offer’ under which it is offering deals for mobile recharges and handsets..
(d) According to UIDAI, if you don’t have your ID and address proof, you can apply for your Aadhaar card through introducer.
(e) All are correct

Q15.
(a) IndiGo is offering flight tickets for as low as ₹899 for domestic and ₹2,999 international routes in the new sale.
(b) Incorporating biometrics, and creating a standard for face ID-based payments would be a major leap to enable digital payments on a mass scale.
(c) The banking ombudsman plays a key role when it comes to your rights as a customer.
(d) You can only complain to the ombudsman branch within whose jurisdiction the bank branch in question is located.
(e) All are correct

Sol. Don’t Judge A Book By Its Cover means Not judging something by its initial appearance. Hence, option (c) is the right answer choice.

Sol. Waiting in the wings means ready to enter a situation, be brought to public attention, or undertake a role, position, etc. Hence, option (a) is the right answer choice.

Sol. Golden Handshake means a payment given to someone who is made redundant or retires early. Hence, option (c) is the right answer choice.

Sol. Giving the benefit of the doubt means Believing someone’s story without proof even though it may seem unbelievable. Hence, option (b) is the right answer choice.

Sol. Heard it on a grapevine means Hearing rumors about someone or something. Hence, option (c) is the right answer choice.

Sol. Biting off more than you can chew means take on a commitment one cannot fulfil. Hence, option (b) is the right answer choice.

Sol. Beating a dead horse means a particular effort is a waste of time as there will be no outcome. Hence, option (d) is the right answer choice.

Sol. Protection should be replaced with ‘protected’. Hence, option (c) is the right answer choice.

Sol. ‘Flied’ should be replaced with ‘flying’. Hence, option (a) is the right answer choice.

Sol. Here, all the given statements are correct grammatically and contextually. So, option (e) is the right answer choice.

Sol. ‘The’ should be included before ‘Constitution of India’. Hence, option (b) is the right answer choice.

Sol. ‘an’ should be included before ‘introducer’. Hence, option (d) is the right answer choice.

watch the video for previous year question paper of IBPS SO: 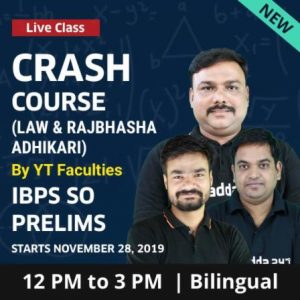 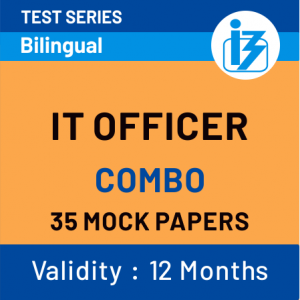