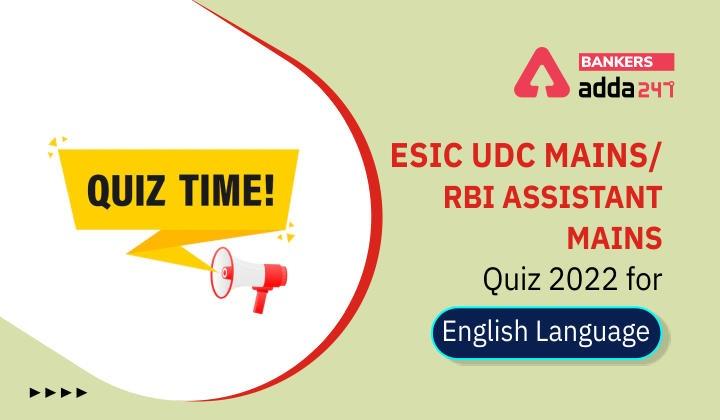 Directions (1-10): Read the following passage and answer the questions following it. Several alphabets are given to help you assist in answering those questions.

(I) A labour union is an organized formed by workers in a particular trade, industry, or company for the purpose of improving pay, benefits, and working conditions. Officially known as a “labour organization,” and also called a “trade union” or a “workers union,” a labour union selects representatives to _______(A)______ with employers in a process known as collective bargaining.

When successful, the bargaining results in an agreement that _______(D)_______ working conditions for a period of time. Unions organized by workers to fight for employee rights and protections, such as a shorter workday and minimum wage, have a long history in the United States. In fact, the first worker strike predates the American Revolution, and the first union was established by Philadelphia shoemakers in 1794. In 1881, the Federation of Organized Trades and Labour Unions was formed, followed five years later by the American Federation of Labour (AFL).

(B) Labour unions have a beneficial (1) structure, holding elections (2) to choose officers who are charged with making decisions (3) that are democratic (4) to the members. Employees pay dues to the union and, in return, the labour union acts as an advocate on the employees’ behalf. (C) Labour unions are often industry-specific and tend to be most common today among public sector (government) employees and.

To form a union, a locally based group of employees obtains a ________(F)________ from a national-level labour organization. Nearly all unions are structured and work in similar ways.

The CBA annihilates (G) pay scales and includes other terms of employment, such as vacation and sick days, benefits, working hours, and working conditions. After signing the CBA, (J) without a union representative’s approval. However, CBAs eventually expire, at which time the labour union and management must negotiate and sign a new agreement.

Q2. The sentence given in (B) has four words given in bold. Amongst the given bold words which of the followings must interchange to make the sentence grammatically and contextually correct and meaningful?

Q3. In the above passage, a sentence (C) is given in Italics. There may or may not be an error in one part of the sentence. Choose the part which has an error in it as your answer. If there is no error, then choose option (e) as your answer.

Q4. Which of the following words should fill the blank given in (D) to make it contextually correct and meaningful?

Q5. Which of the following phrases should fill the blank (E) to make it contextually and grammatically meaningful and correct respectively?

(a) with nearly 3 million members
(b) established in 1935 by the National Labour Relations Act
(c) are properly compensated and represented
(d) represents public school teachers, substitute teachers, higher education faculty members
(e) None of the above

Q6. Which of the following words given in the options should come at the place marked as (F) in the above paragraph to make it grammatically and contextually meaningful and correct? Also, the word should fill the two sentences given below to make them contextually correct and meaningful?

Q7. A word is given in bold in (G). Choose the word which should replace the word given in bold to make the sentence correct and meaningful. If no change is required, choose option (e) as your answer.

Q8. The sentence given in (H) has four words given in bold. Amongst the given bold words, which of the followings must replace each other to make the sentence contextually correct and meaningful?

Q9. In the passage given, a sentence (I) is given in Italics. There may or may not be an error in one part of the sentence. Choose the part which has an error in it as your answer.

(a) A labour union is an organized
(b) formed by workers in a particular trade
(c) industry, or company for the purpose of
(d) improving pay, benefits, and working conditions
(e) No error

Q10. Two sentences are given in italics on both sides of (J). Which of the following statements can come in between the two sentences in place of (J) and maintain the continuity of the paragraph?

(a) it is the largest labour union in the United States
(b) refuses to admit Black people, women, and immigrant groups
(c) an employer cannot change the agreement
(d) firing and disciplining officers is in the hands of arbitrators
(e) None of the above

S1. Ans. (a)
Sol. Among the given words, “negotiate” fits aptly in the context of the passage as it means to deal or bargain with another or others, as in the preparation of a treaty or contract or in preliminaries to a business deal.
All the other words are either contextually incoherent to the passage or they fail to fit in either of the sentences. Hence, option (a) becomes the most suitable answer choice.

S2. Ans. (d)
Sol. The position of the words ‘beneficial’ and ‘democratic’ may seem grammatically correct but they prevent the sentence from making contextual sense. Hence, option (d) is the correct replacement.

S4. Ans. (d)
Sol. Stipulate means demand or specify (a requirement), typically as part of a bargain or agreement.
Brawl- to fight loudly and disruptively.
Undermine- to weaken or subvert (usu. gradually or secretly).
Infer- to guess, conclude, or derive by reasoning.

S5. Ans (c)
Sol. Only option (c) accurately describes the union’s bargaining unit and then goes onto give the sentence both contextual and grammatical sense.

S6. Ans (a)
Sol. A charter is a formal document describing the rights, aims, or principles of an organization or group of people.
Acquisition- an asset or object bought or obtained, typically by a library or museum.
Protocol- the official procedure or system of rules governing affairs of state or diplomatic occasions.
Altercation- a noisy argument or confrontation.

S7. Ans (d)
Sol. To outline means to give a summary of.
Breach- an act of breaking or failing to observe a law, agreement, or code of conduct.
Hover- remain in one place in the air.
Amalgamate- combine or unite to form one organization or structure.

S8. Ans (c)
Sol. Here, 3-4 i.e., ‘faith – bargain’ will be replaced to make the sentence grammatically and contextually correct.
The sentence thus formed is: U.S. law (1) requires an employer (2) to actively bargain (4) with a union in good faith (3).

S9. Ans (a)
Sol. The error lies in the first (a) part of the sentence.
The use of ‘organized’ is incorrect and fails to make contextual or grammatical sense.
It will be replaced by ‘organization’ which means a group of people who work together in an organized way for a shared purpose

S10. Ans (c)
Sol. The correct option is (c): an employer cannot change the agreement.
Going by the context of the paragraph and the definition of CBA (collective bargaining agreement), one can pick out that the best fit for the sentence is option (c).
Other options fail to make contextual sense if considered as the answer.